There are many dating sites for the LGBT community. However, most of these tend to fall under one of two extremes. They are either designed to revolve entirely around the “one-night-stand no-strings-attached” encounter, or they are extremely mild to the point of being boring.

What if there were an LGBT dating site that was able to maintain multiple facades? An exciting and exotic appeal for some, while also being inclusive and accommodating to those who may like exciting surroundings but who prefer a mellower approach when it comes to personal encounters.

BGClive is a gay social dating site that has structured itself to have that type of eclectic appeal. It can be extremely wild and crazy, or it can be bohemian and mysterious — each user can make of it what they want.

Does this sort of gay social dating site sound interesting to you? If so, read our full BGClive review. Find out how wild, inclusive, and wide-ranging it can be. It is the only way that you will find out if it is right for you. 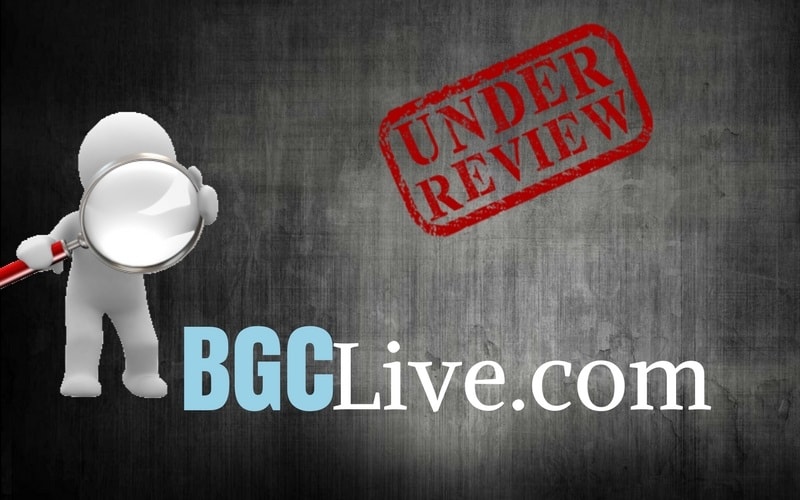 We found BGClive to be an interesting gay social dating site. While its design aesthetic leaves plenty to be desired, the community that has formed around it we found to be refreshing, energetic, fun, and wild. That being said, the site also manages to create an atmosphere in which even the timidest of personalities can find a place.

The relatively small membership size, and the fact that the majority of members who seek physical encounters reside within the northeastern United States doesn't make it the most practical of sites for those seeking real dating or hookups.

In general, however, if you are seeking conversation, online relationships, or something real in the Northeast, BGClive appears to be a solid site.

Overall, we would rate it as GOOD.

Okay, so BGClive.com is a gay social dating site. That means that the fundamentals of the site should be reasonably clear. It caters to gay men, lesbian women, bisexual individuals, and members of the transgender community. The social aspect comes into play in the way that its users can interact with each other. As opposed to a traditional dating site, BGClive uses social mechanisms — similar to those on Facebook and other social platforms — to generate interactions between its users.

In other words, it’s not just a matter of entering the physical attributes that you’re looking for in a partner, being fed a list of potential partners, and then swiping left or right to find your next one-night-stand. Yes, BGClive can help you find one-night-stands, but that is not the only thing that it is designed to do. It is more comprehensive, more engaging.

BGClive is designed to be accessed via your desktop browser or as a mobile app. Unfortunately, in its mobile incarnation, it is only available as an app for Android devices. Currently, there isn’t an app available for iOS devices.

The Android app has a somewhat antiquated look as far as mobile apps are concerned. Even so, it is easy to navigate, fast, and fairly intuitive to use.

The desktop version of BGClive has a look that is even more antiquated than its mobile version. Some people have equated its aesthetic appearance to MySpace — anyone remember MySpace?

Our opinion of the look of the desktop aesthetic for BGClive is far kinder. Yes, it looks a bit out of style. The desktop navigation is clunkier than its mobile version, but it is quite functional. BGClive places functionality over appearance. For some people, this might be an issue. In our case, we find it easy to forgive the aesthetic failings of BGClive due to its strong community appeal.

In order to understand the features and all that you can accomplish on BGClive, you should first place yourself in a mindset of being on a social media platform as opposed to a dating site. Yes, BGClive has discovery features which include standard and advanced search options. 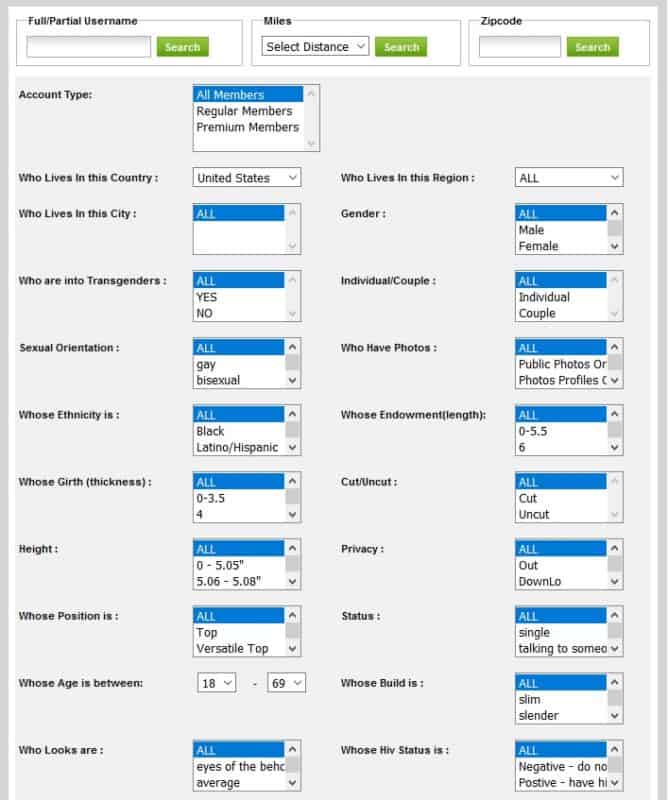 There are also forums, original video programming, content posted by other users, and topical discussion pages which make BGClive far more powerful when it comes to significant engagement than your run-of-the-mill gay dating site.

Before you join any dating site, it is normal to want to know who uses the site? What sort of audience does it have? How broad is the community?

In the case of the BGClive, its active membership base consists of approximately 600,000 people. Of these, close to 90% are male. This statistic, combined with the direct observation of our testers, brought us to the conclusion that even though BGClive promotes itself as an LGBT platform, it’s most active members consist of gay men. This results in the majority of the site — from its discovery features to its forums, stories, and chat rooms — being geared more toward the preferences of gay men.

Also, while BGClive is inclusive — in other words, it allows anybody who wishes to participate to join — it promotes itself as a site focusing more on the African-American and Hispanic community. Mind you, during our testing we found plenty of other ethnicities represented, but it would be fair to state that 75 percent of the members are either African-American or Hispanic.

Another important point to mention is that the majority of members who actively seek real-world encounters seem to reside in the Northeastern part of the United States. While there are members from throughout the U.S and other parts of the world, the regional disparity is large. To use BGClive as a dating platform, you practically have to live in the northeast. For general socializing or as a platform for discovering content, its appeal can be considered global. 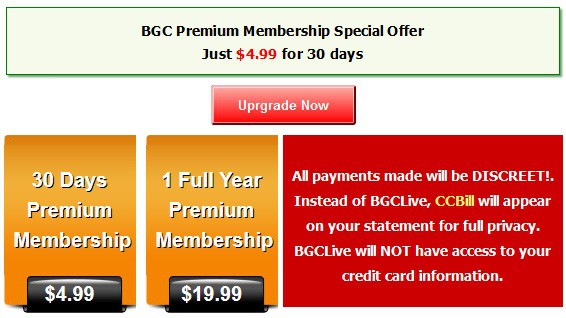 While the free version of BGCLive is powerful enough to give you a complete experience, they offer a premium membership option. A 1-month membership has a cost of $4.99 a month while a full year’s membership will set you back $19.99. This is a bargain compared to other sites in the industry. Benefits of having a paid membership include, but are not limited to, faster browsing speeds, removal of all ads on the site, the ability to browse in stealth mode, and the power to erase ratings.