The majority of dating apps on the market are designed from a male or gender-neutral perspective. This leaves a huge gap for an app to come in and capture the female dating market. Founded in 2012, Coffee Meets Bagel has been doing just that. This dating app is welcoming to all, but its approach is clearly centered on appealing to women. In fact, Coffee Meets Bagel is one of the few dating apps that has more female members than males — 60 percent of the membership consists of women. Here is our Coffee Meets Bagel Review. 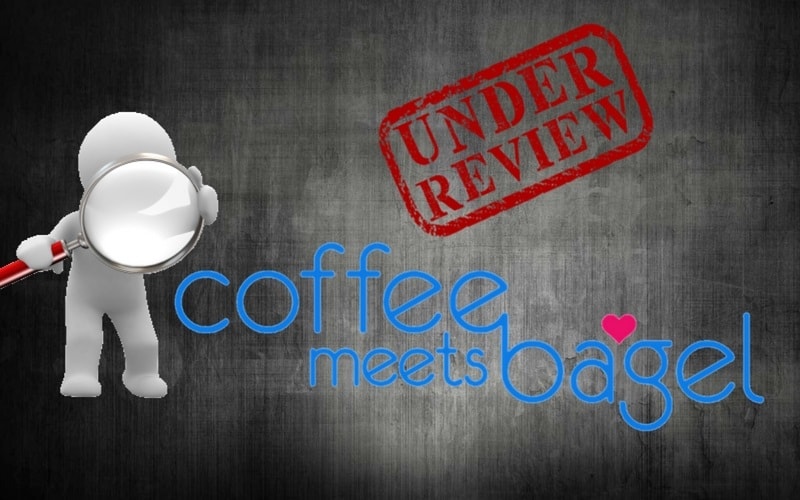 After concluding our Coffee Meets Bagel review, we can honestly say that the app is definitely a refreshing presence on the online dating stage. It creates a fun and pleasant user experience that is never brash nor vulgar. You feel comfortable engaging with potential matches. For women, the fact that you are only shown profiles of men that have already expressed interest in your profile is empowering. In combination with the seven-day time limit, it makes it easier for women to take the step of making first contact with their matches.

If you are searching for a partner to establish a long-term relationship and don't mind engaging with a dating app on a daily basis for a prolonged period of time, Coffee Meets Bagel can be worthwhile. If you have a bit of a wild streak, its efforts to incentivize engagement will probably not work on you. Overall we rate the app as VERY GOOD — WORTH A TRY.

Watch our Coffee Meets Bagel review on video or scroll down to keep reading.

Two of the slogans for Coffee Meets Bagel are “Quality Dating Made Easier” and “Stop Swiping Your Life Away.” These are not just empty words. Once you start digging into the app, you realize that it provides just enough structure to the online dating experience to make it interesting again. It’s not just another who’s hot and who’s not swiping app.

Noon is as important to this app as to a classic western. You see, at noon, members receive their daily dose of “bagels.” Don’t get the sour cream out just yet, “bagels” is the term used by Coffee Meets Bagel to refer to suggested matches. Males are presented with as many as 21 qualified female matches (bagels) per day. If you had used Coffee Meets Bagels prior to 2015, you only would have been presented with one bagel per day.

The men are then expected to “LIKE” or “PASS” on the bagels that they receive each day. Coffee Meets Bagels then curates all of the “LIKES” received and delivers to the female members bagels consisting solely of men that have “LIKED” their profile. In other words, women only receive bagels that have already expressed an interest in them. The women then “LIKE” or “PASS” on their bagels.

When a mutual “LIKE” occurs between two members, the option to open a private chat becomes available to the both of them. This option remains open for only seven days — after that, it’s lost forever. During our evaluation, we found that this enticed us to reach out to our matches. There was an underlying sense of urgency created by that seven-day time window. On other sites, where there isn’t such a time incentive, it is easy to procrastinate and allow the potential match to go stale.

Aside from its unique approach toward bringing compatible matches (sorry, we meant bagels) together, Coffee Meets Bagel also offers additional tweaks to the online dating experience that enriches the user experience. An example of this is the suggested ice breaker questions that are provided to you when you hit upon a mutual match. In our case, we found them to be lifesavers — they helped prevent those dreaded moments when the chat seems to stall or fizzle.

The app also offers easy access to step-by-step tutorials. There was a moment when we encountered some confusion regarding the use of the icebreakers. With just a few swipes, we were able to access an easy to understand guide that solved our problem and had us swiftly back to our open chat in less than a minute.

Coffee Meets Bagel claims that 96 percent of its members have at minimum a bachelor’s degree. Since there is no independent way to verify these claims, you will have to take them on their word.

Industry surveys conducted on Coffee Meets Bagel users indicate that 70 percent use the app to search for a long-term partner; 12 percent use it to find casual hookups. This figure supports what we experienced during our evaluation — the exchanges that we had with our matches were fun, flirtatious and polite. The sort of conversation you would want to have if you were considering setting up a first date. At no time did we encounter individuals that were just out to find a “quickie.”

Over 60 percent of Coffee Meets Bagel’s members are between the ages of 24 and 35. The app claims that it makes 650 successful couple matches per week and that it has made over 60,000 successful matches in just under five years of operation.

Coffee Meets Bagel is a mobile-only service, You must download its app for the iPhone or Android devices. There is no cost to use the app — it’s free to both men and women.

The app uses creative methods to incentivize continued engagement by its members. This is done through the awarding of “coffee beans.” The more time you spend on the app, the more matches that you initiate chats with — the more coffee beans you earn. These coffee beans can be used to view additional bagels, view in-depth statistics regarding your profile, as well as reports detailing which pictures that you have posted have been rated as the most attractive by other users. Aside of being awarded these coffee beans. you also have the option of purchasing them whenever you want. This is the only cost associated with this app and it’s entirely optional. From our point of view, the coffee beans that you earn just by interacting normally with the app are more than sufficient.

One area that we did have an issue with was the need to link a Facebook account to Coffee Meets Bagel upon registration. For some people, the fact that the app uses what is known as a “split-wheel” based off your Facebook friends can be worrisome. In essence what a split-wheel does is to determine whom among the Coffee Meets Bagel’s membership base has some association with you — be it once or twice removed from your Facebook friends.

This creates the possibility for your profile being matched up with people that you may already know casually — or worse — imagine being matched to the friend of an ex. We hope that Coffee Meets Bagel changes this reliance on Facebook in the near future.