Dating.com makes it seem like they have found a way to remove the rigidness and impersonal approach of other dating platforms. It is as if they have found the secret sauce for finding fun and like-minded partners.

If the thought of such a dating site intrigues you, then you may want to check out Dating.com for yourself. However, before you do, we suggest you check out our review of Dating.com. Find out what our team of testers discovered when using the site. 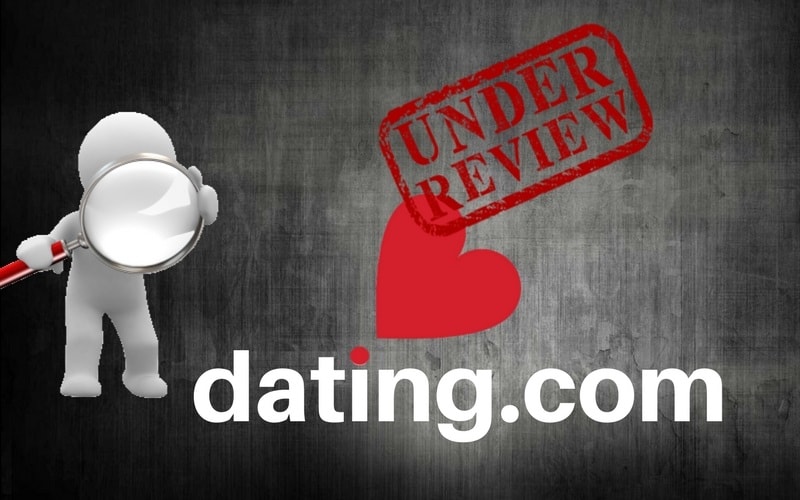 Due to the fact that Dating.com has very few users that can be classified as real, combined with its weak search function and convoluted pricing model, we are left with no choice but to rate Dating.com as POOR. 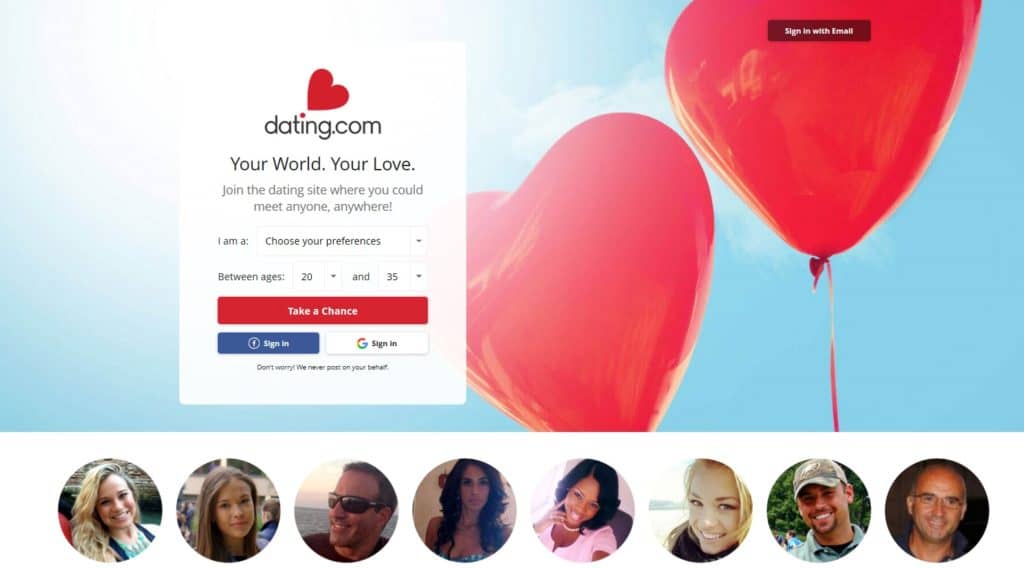 Dating.com is available for desktop browsers as well as a native app for Android and iOS devices. The latter can be downloaded from Google Play and the App Store respectively.

All three versions of the Dating.com platform are easy to navigate and perform well. During three days of testing, our testers only encountered one lingering technical issue with the desktop version. In repeated instances when our testers attempted to open the photo albums of other users, the screen would attempt to open another window repeatedly and then become inactive. Over the three days of testing, this happened at least half a dozen times. 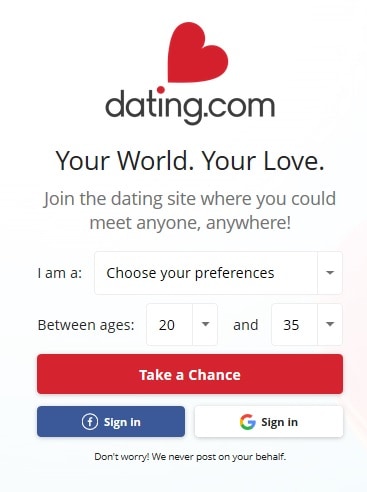 New users to Dating.com can register for the service by linking their Facebook or Google Plus accounts. This is the fastest way to register on Dating.com as it will import the majority of the information required to populate your dating profile from those platforms. You’re also given the option of registering with a valid email. Using this method requires you to validate your email by clicking on a verification link that is sent to you shortly after registering. 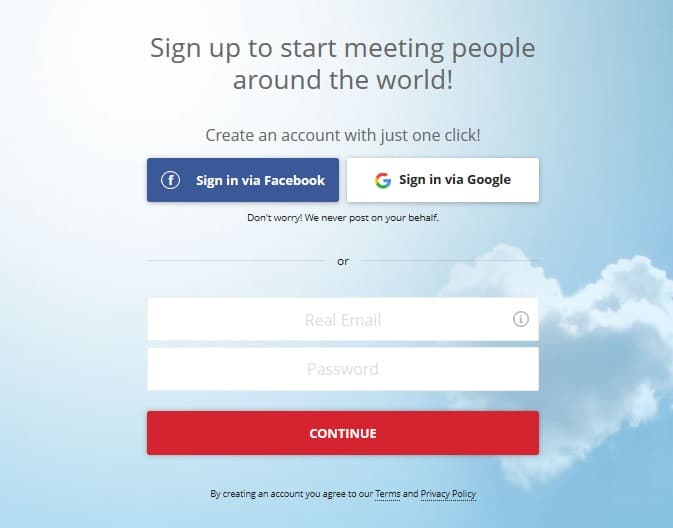 Regardless of the registration method selected, new users will still need to customize their profile before getting started. This process includes writing a few words about yourself in addition to describing your ideal partner.  You must also select from a list of 24 interests. 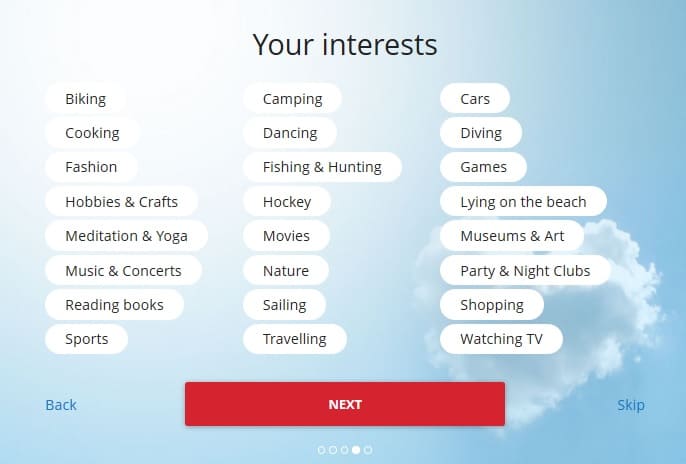 This information is used when the Dating.com platform presents suggested matches to you. Among the interests you can choose from are camping, nightclubs, and watching TV.

Dating.com claims that they review all new registrants before approving them to use the platform. However, in the case of our three testers, registration seemed to be instantaneous. None of them experienced any delays or lag time in using the system. Dating.com does not reveal how it conducts its review process of new members but it apparently is not that exhaustive.

The feature set offered on both the desktop and mobile versions of Dating.com are identical. It consists of a basic search function, email messaging, online chat with video capability, winks, and gifts.

We were surprised to see how basic the search function really was. The only customization that you can apply to a search on Dating.com involves changing the gender, age range, location, and interests of those you seek to meet. Compared to other dating platforms, that is extremely rudimentary. 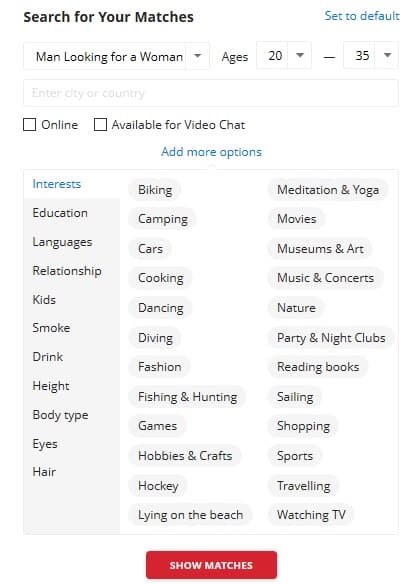 The email and online chat modules are equally as plain as the search function. The addition of a video chat feature, however, does add a refreshing element to an otherwise ordinary feature.

The online gifting feature offers users the ability to send other users physical gifts. These include flowers, goodie baskets, gift cards, stuffed bears and even high-priced items like iPhones and tablets.

These gifts are purchased using “credits,” which are a form of online currency used on Dating.com. These credits can be used to purchase these gifts as well as other services on the platform.

The user experience on Dating.com was not what we had hoped. Based solely on its appearance we had expected to find a dating platform that — although not on the cutting edge — would have at least provided an acceptable user experience.

Unfortunately, what we found on Dating.com was a user base that is scattered throughout the world. When you combine that with its primitive search module you end up with suggested matches that are equally as scattered all over the world. If you are serious about finding a potential match that lives near you, Dating.com is not your best choice.

Additionally, Dating.com is guilty of using one of the most annoying tricks in the online dating industry — namely, fake profiles. Moments after joining the site you will start receiving message alerts as well as emails. When you open these messages they will seem to be coming from attractive female members of the site. The reality is that these are just automated messages created to get you to respond. In order to respond, you must have a paid membership.

Based on the experience from our testers, we estimate that roughly ten percent of the Dating.com user base is comprised of real people. Of those, less than half can be described as active. In other words, any amount of time or money that you spend on the site is bound to be more wasteful than fruitful.

The cost for a one-month membership on Dating.com is $9.99. This includes free three-minute chats with ten users, the sending of three messages to ten users, and ten emails to ten users. That means that even after paying for a monthly subscription if you want to engage other users above the limitations mentioned here, you will have to purchase additional credits. 20 credits will cost you $15.99, 160 credits will cost you $96.00, 1,000 credits $399.00. As a bonus for signing up, with your first purchase, you’re entitled to 90% off on your first purchase of 20 credits.