Before you join DatingDNA, take a look at our review down below. It will reveal the high points and the flaws that we discovered on the site. 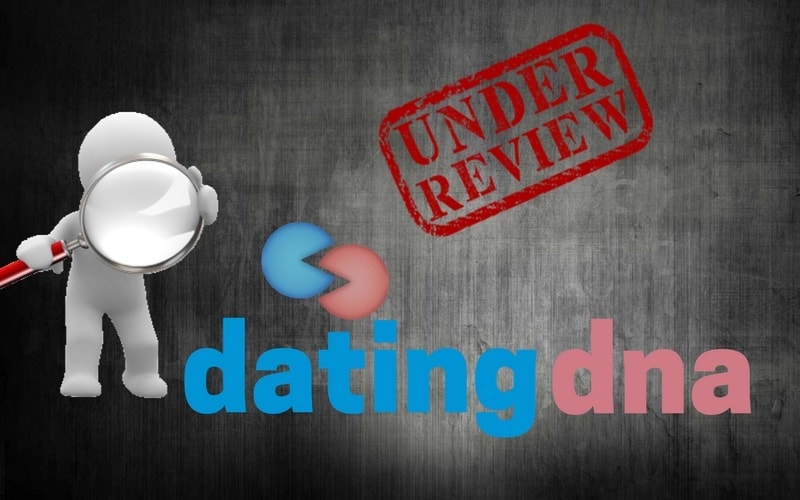 We can definitely say that we found DatingDNA to be a very powerful and impressive dating site. For those seeking long-term relationships, we feel that it rivals some of the higher-end paid dating sites. If you live in a densely populated urban area of the United States or Canada you will very likely have an excellent user experience on DatingDNA. However, due to the fact of its user base is still not as large as its paid rivals, those living in less densely populated regions may have difficulty finding compatible partners.

Even so, the user experience offered by DatingDNA cannot be described as anything short of EXCELLENT.

There is a point when we all become serious about “adulting.” Our dating habits begin to evolve — we begin to seek out people with whom we are more compatible. Obviously, physical attributes are still part of the equation, but we also begin to consider our partner’s passions, their desires, and their personality. Essentially, we start looking for people who satisfy us not only physically, but also emotionally and spiritually.

Under those circumstances, casual dating sites will offer very little to us. This is why more complex sites, such as DatingDNA.com, are appealing. DatingDNA promotes itself as being 100 percent free to use and focused entirely on compatibility.

That may sound too good to be true. That is why we took DatingDNA for a spin in order to determine just how effective it is.

When we first heard about DatingDNA, we were skeptical. It is quite common in the online dating industry to come across dating sites that promote themselves as being free options to more well-known and well-established sites. When we first visited the welcome page for DatingDNA we felt its styling to be somewhat dated. That alone, of course, does not necessarily mean that the site has no value.

As we dug deeper into the site, the overall aesthetic of the design was consistently dated, but in terms of its performance — above all the breadth and depth of its matchmaking engine — really impressed us.

The most frequently asked question about DatingDNA is, “is it really free?”

We came across a few reviews online that claimed that DatingDNA charged for a premium version. During our testing we found the site to be 100 percent free. There were no upgrades that required payment. Our research also indicated that in the past, the site had experimented with charging $4.99 for a premium version. As of November 2017, however, that is no longer the case. The site is absolutely free.

We are also happy to report that the site is free of any advertising. Unlike other dating sites that operate under a free model and generate revenue through banner advertising, DatingDNA offers a clean user interface free of advertising.

The developers of DatingDNA want to offer their users as clean of a user experience as possible. As they have stated, the reason for doing so is so they can receive input from their users free of distractions. They have also indicated that at some point in the future they will be charging for some aspects of the service. However, there is no information as to when this monetization maneuver will occur. Suffice it to say, it is free now, so why not take advantage of it?

When you look at the majority of DatingDNA members, you will find that the only characteristic that they have in common is that they appear to be serious about dating — most are interested in long-term relationships. That does not mean that those seeking more casual relationships are not on the site, but by our estimation, they would account for less than 20 percent of the membership base.

In terms of other demographic data, DatingDNA is highly inclusive. You will find people from all age groups — from 18 to those who are 55-plus. In terms of lifestyle, DatingDNA is open to those seeking heterosexual, gay, lesbian, or transgender partners.

DatingDNA has a unique registration process. While it is available as a desktop as well as mobile platform, during registration it is mandatory that you first download the iOS app. There is no alternate method of registration. That means that if you do not have an iOS device you will not be able to register on the site. This was one of the few things about DatingDNA that we were displeased with. We hope that in the near future they will open access to their site to those who do not have an iOS device.

Even though the downloading and installation of the iOS app is mandatory, we found that the process of completing the lengthy profile questionnaire is easier when done on the desktop version. According to DatingDNA, the reason that they require the installation of the IOS app is to prevent people from signing up for multiple accounts. It is part of their effort to minimize fake profiles and trolls. They say that this method is more effective than going through the Facebook sync procedure that many other online dating sites use.

In terms of the performance of both platforms, due to the complexity of the site, we found that that the desktop version offers a better user experience. This is not to deride the mobile version — it is solid and fast. Our testers did not encounter any technical issues with it. However, we found that the mobile version is best when used solely to monitor your account, not to interact with it.

On most dating sites, when we look at their features we are looking at individual components of the site’s user interface. These are normally related to online chat, search, and other discovery features. On DatingDNA, however, there is no way to escape the fact that its most powerful feature is the robust user profile that it requires all users to have. This requires new users to fill out a very thorough questionnaire. While you don’t have to complete it all at once, until you do so, your access to the full power of DatingDNA will be limited. 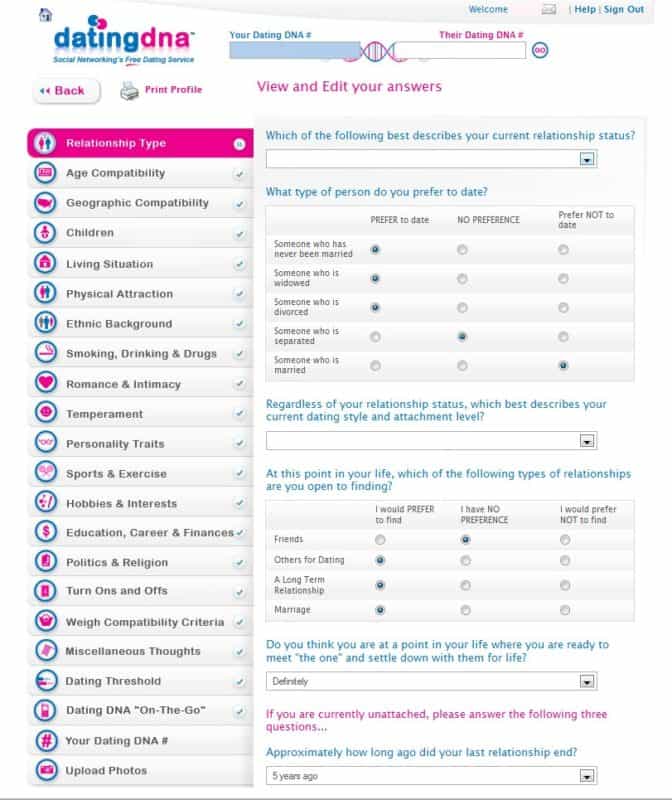 This is because when it comes to the site’s powerful matchmaking algorithm, it requires all of the information on the questionnaire to serve up potential matches. Also, due to its “Compatibility Threshold” feature, other members can only see the profiles of other members that DatingDNA determines to be compatible. This is done to prevent curiosity seekers from surfing through the site and wasting everybody’s time. While this may seem cold, in reality, we found it to provide for a cleaner and neater user experience.

When you look at the profiles of other members, you will be drawn immediately to the “Compatibility Score” feature. A perfect score of 10 would mean that you are probably soulmates and have had a romance in some other lifetime. Our testers found that any reading above 7 is good. Normally when you engage in communication with these people you will find that conversation will flow smoothly and that you have many things in common. Again, this is all due to the thorough questionnaire that you filled out at the beginning.

DatingDNA also has a traditional “friends list” with a slightly more powerful twist. You can store notes on other people that you have chatted with, their star ratings and even their phone numbers if they gave them to you. It’s not just a “click-and-save” feature, it actually accepts and stores your own input so you can have it handy for later.