This one goes out to all of our Canadian friends. From Toronto to Vancouver, from Halifax to the Yukon — Canadians share many things in common. We are well mannered, well learned, courteous, civil, appreciative of the fact that if it doesn’t come with real beef gravy it’s not really poutine, and we are also eager to GET LAID. This is why the classified ad site known as LeoList.cc is viewed by some with great hope as a potential source for finding and meeting hot men and women for wild casual sex. After all, LeoList does call itself “Canada’s Classified Site.” What more proof could you possibly need?

Hmmm, a classified site to hookup? That sounds so old school Craigslist, right? Can LeoList really help you to get laid in Canada?

We conducted a review of LeoList and evaluated its performance. Before you start perusing through the ads on LeoList yourself, we suggest you read our review. That way, you will be well informed as to its real potential. 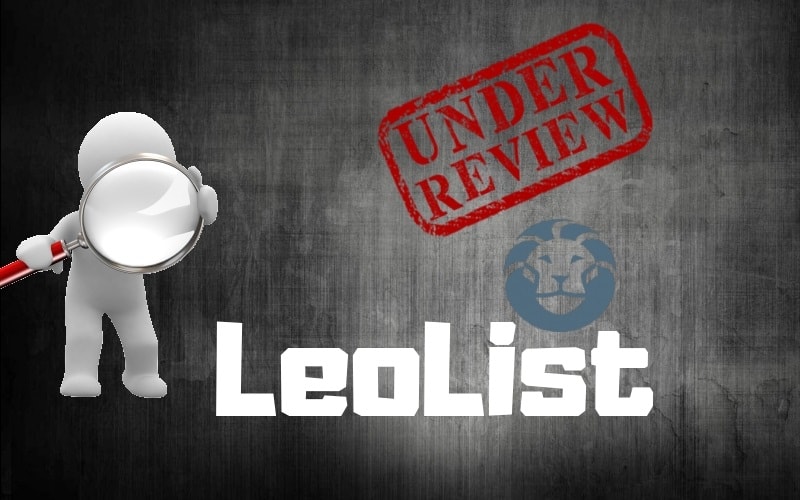 Considering that there are many online dating and hookup sites that do offer excellent platforms to discover and meet real people for casual encounters, a site such as a LeoList, in our opinion, doesn't serve much of a purpose. Being candid, we found LeoList to be completely ineffective unless you are looking for an escort agency directory.

We rate LeoList as a FAIL and would suggest that you seek other hookup sites to get laid in Canada.

— What Exactly is LeoList? —

First, it is important to clarify what LeoList is. It is not a hookup or dating site in the traditional sense. It is a classified ads site. If you are familiar with Craigslist you will have a clearer idea of what LeoList strives to be. It attempts to be a site like craigslist. 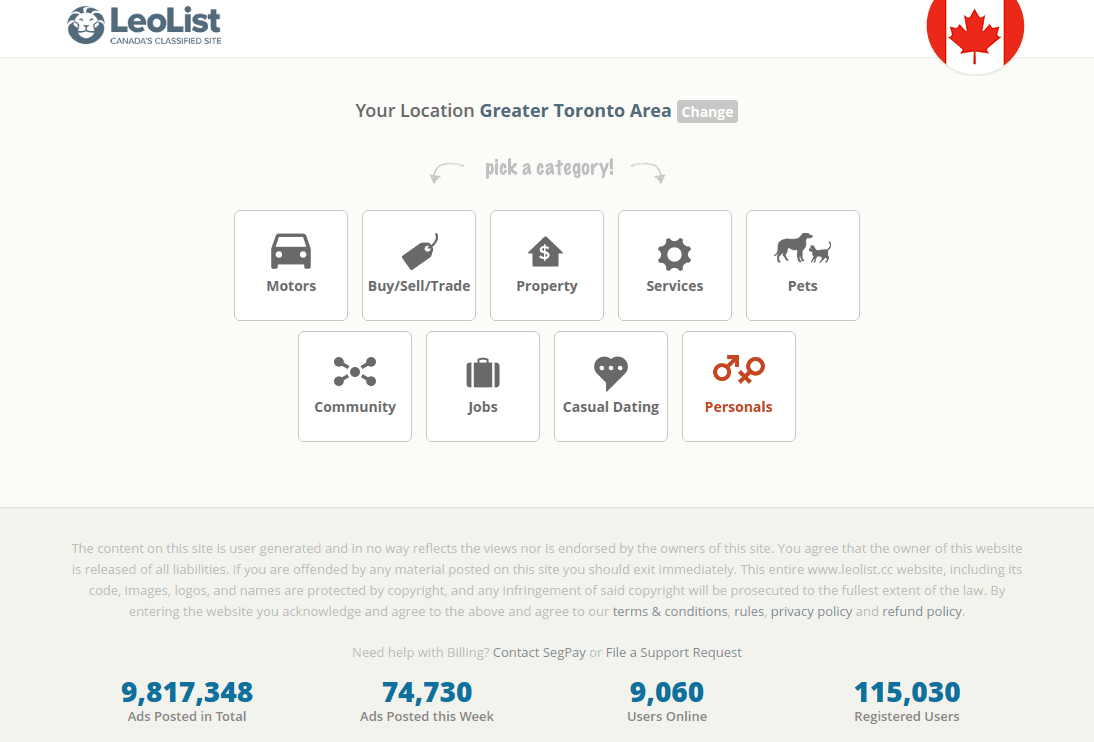 We don’t know about you, but nothing gets us hornier than reading through ads for local garage sales.

When it comes to hooking up and getting laid, the attention on LeoList focuses on their “casual dating” and “personals” categories. Hopefully, the “pets” and other sundry categories are not going to be what get you hot.

— Difference Between the “Casual Dating” and “Personals” Sections —

We figured that since these two categories — “casual dating” and “personals” — were purposefully set apart by LeoList, that there were going to be distinct differences between them. Upon spending just a few minutes on the site, however, we were able to ascertain that they are practically interchangeable. As a matter of fact, in some cities, the posts under one category also appeared in the other.

Ideally, the personals section is supposed to be where you would find “professional” type company. 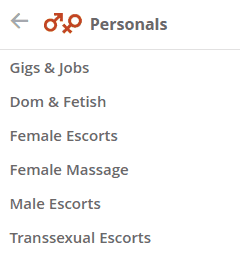 This is why the category is divided into female escorts, female massage, male escorts, transsexual escorts, and a further subcategory known as “gigs and jobs.”

The casual dating category is supposed to be where regular folks place their ads for their carnal needs. This is divided into many subcategories as well to accommodate men, women, gay, straight, bisexual, transgender, and even those were only seeking plutonic friendships. 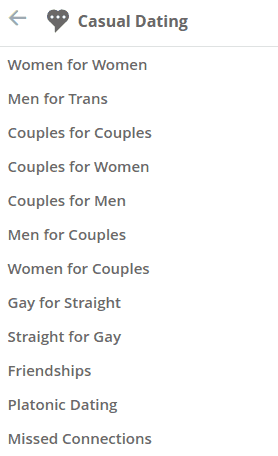 Why anybody would post a classified ad just to find a platonic friend, we don’t know, but that is a topic for another day.

— Who Places Ads on LeoList —

When it comes to the personals and dating sections of LeoList, the people who place ads there or not your everyday guys and gals looking for a little “fun.” Regardless of where our testers registered or signed-in from, over 99 percent of the ads that they found in this section belonged to someone who would rightfully be called a “pro.”

In other words, LeoList is crawling with escort services. While that is definitely one way to hook up, that is usually not what the majority of people are looking for when they are thinking about a no-strings-attached casual encounter.

All of our testers reported a very similar user experience.

On LeoList you can browse through the site whether you are officially registered on the site or not. When you browse through the ads you will find that each will consist of images of the person, a few words describing the service that they are offering and contact information —usually in the form of a telephone number and sometimes an email address. 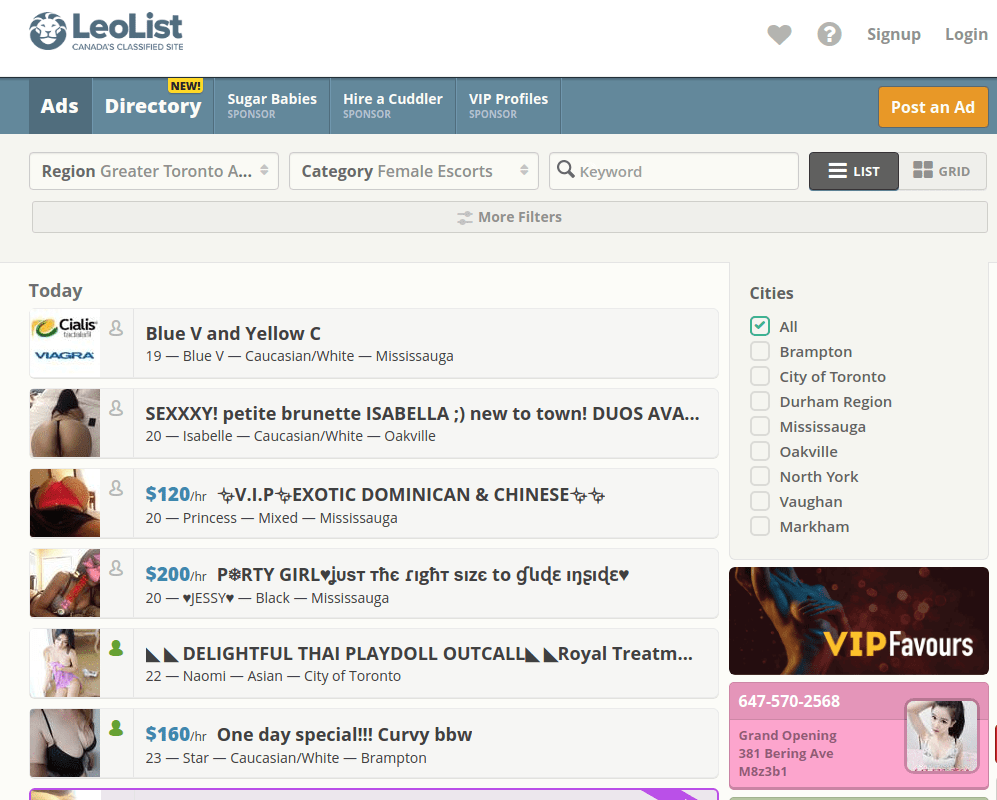 This means that you can make contact with the person who places the ad directly. LeoList also offers the option of sending a message to the person via their internal messaging system.

In the upper portion of the LeoList platform, in the navigation bar, you can find two options. One is called “ads” and the other one is called “directory.” Under the ads section, you will find the classified listings that have been left but not vetted by LeoList itself. In the directory section, you will find a very similar set of listings, however, the authenticity of the poster has gone through a review process, albeit a rather simple one.

In order to post a listing in the directory section, the person submitting it must upload five images to LeoList in which they are holding up a sign with a handwritten legend that read, “LeoList.” We know, that’s not much of a test, but at least it’s something.

Unfortunately, the further our testers probed LeoList, it became increasingly obvious that it is entirely ineffective when it comes to finding like-minded adults for casual sexual fun. At best, LeoList can be relied upon solely to find the services of paid escorts. By our standards, paid escorts are not real world hookups or casual encounters.