If you are interested in transgender dating we urge you to read our TGPersonals review below. It will provide you with enough information to help you make up your own mind as to whether this site is the right choice for you. 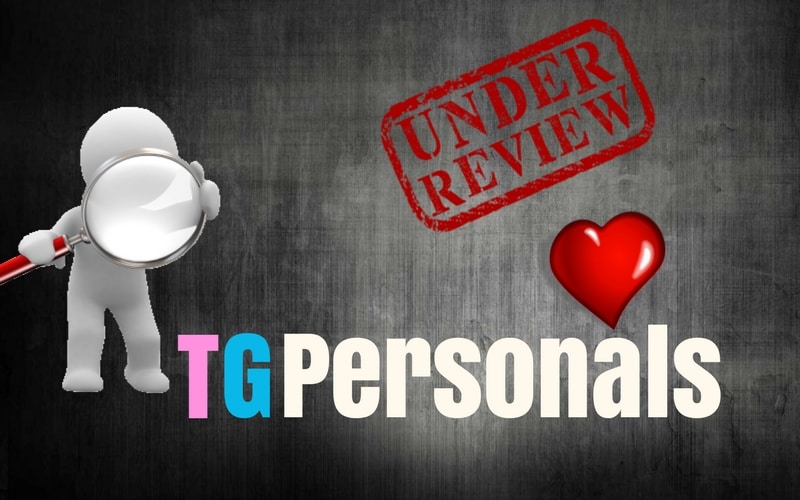 TGpersonals is one of those dating sites that you desperately want to root for — it is a site that was founded and is maintained out of a personal passion and a strong appreciation for the transgender community. Unlike more commercial dating sites that cover this same niche, it is not able to afford expensive marketing and fancy technical features. This, however, is what gives it its cozier community feel. Unfortunately, it also can make it unappealing for new members.

Our final opinion of TGpersonals is that it definitely merits a chance. You should give it a try, but be aware that your experience on the site might be different from those of established members. The combination of its technical bugs and small membership base might not yield results for everybody.

Overall, we would rate TGpersonals as FAIR/GOOD. 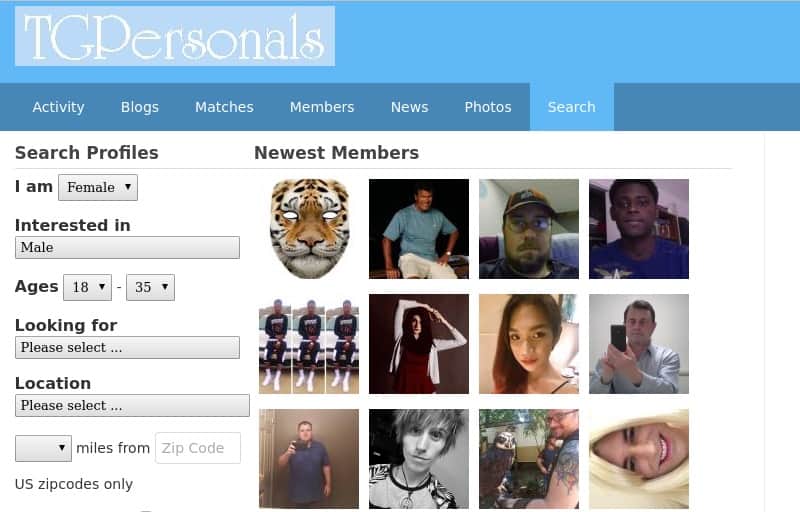 With a lot of attention going to the newer sites, people often forget about a dating site dedicated exclusively to the transgender community that has been in continuous operation since 1999. We are talking about TGpersonals.com. Essentially a one-man operation, TGpersonals has managed to create a community for transgender individuals and has an established and loyal following.

The fact that it has been in operation for so long and that those who use the site praise it consistently, made us want to take a closer look at it. We conducted a review of TGPersonals in order to determine how it compares to newer transgender dating sites.

When we look at a specialized dating site, such as TGpersonals, we like to start by analyzing its current user base. This is important because specialized sites will usually have smaller membership numbers compared to general dating sites. As such, the level of engagement between members and the percentage of active members gains more importance with these types of niche sites.

In the case of TGpersonals, we found that even though it has been in operation for close to two decades, its total membership is below 200,000. While that might seem like a small number, it is important to note that the majority of transgender dating sites have membership sizes below the one million mark. It is also significant that over three-quarters of the TGpersonals membership base can be described as active. By definition, active members visit the site at least once a month.

When we tested the site, we found that this high level of engagement resulted in fluid channels of communication. Our testers reported that they never had a shortage of interested parties sending them messages. They also reported that the people contacting them seemed to be legitimate. In three days of testing, our three testers only encountered a total of four messages that seemed suspect in terms of being spammy in nature.

We cut to the chase regarding cost early in our review because what makes TGpersonals unique is that it is an entirely free site to use. There are no premium versions, it is 100 percent free.

The site is able to remain free because, as we had mentioned earlier, it is a one-man operation. This is an important point to keep in mind when we discuss the aesthetics of the site. In terms of monetization, TGpersonals generates sufficient revenue to sustain itself by placing banner advertising on its platform. During our testing we found this type of advertising to be somewhat distracting, but it was not invasive. It is a reasonable sacrifice to make for using the site for free.

When you first visit TGpersonals, you will be struck by how dated the site looks. It literally has the aesthetic of an antiquated social networking site circa the 1990s. Normally, this would be a cause for strong criticism — even ridicule — on our part. However, since we are aware that the site is maintained by only one person, we did cut them some slack. Besides, the effectiveness of a dating site is not dictated directly by its superficial appearance.

In terms of the features that the site offers, they may seem archaic compared to other modern dating sites, but in terms of finding suitable matches in your area, it performs adequately.

Don’t expect to find a series of fancy features on TGpersonals. The site sticks to the basics. What you can do on TGpersonals is conduct searches based on age range, location, and sexual identity. You are then presented with a series of potential matches. You can then opt to send them a message. The messaging system is not designed as an instantaneous online chat, although if both members happened to be online at the same time, it could be used for that purpose. You have the choice of being notified when you receive new messages via your normal email. Otherwise, you would have to check your inbox each time that you log into TGpersonals.

Also, there is a “blogs” section that allows members to post entries regarding any topic that they have on their mind. When we looked at it, we felt that it resembled more of a forum than a blogging platform, but that is just semantics. The result is that this blog section is a great tool for offering community interaction, as well as a secondary discovery feature. In other words, through reading these blog entries and exchanging comments, it can also become a secondary method of meeting people for potential dates. 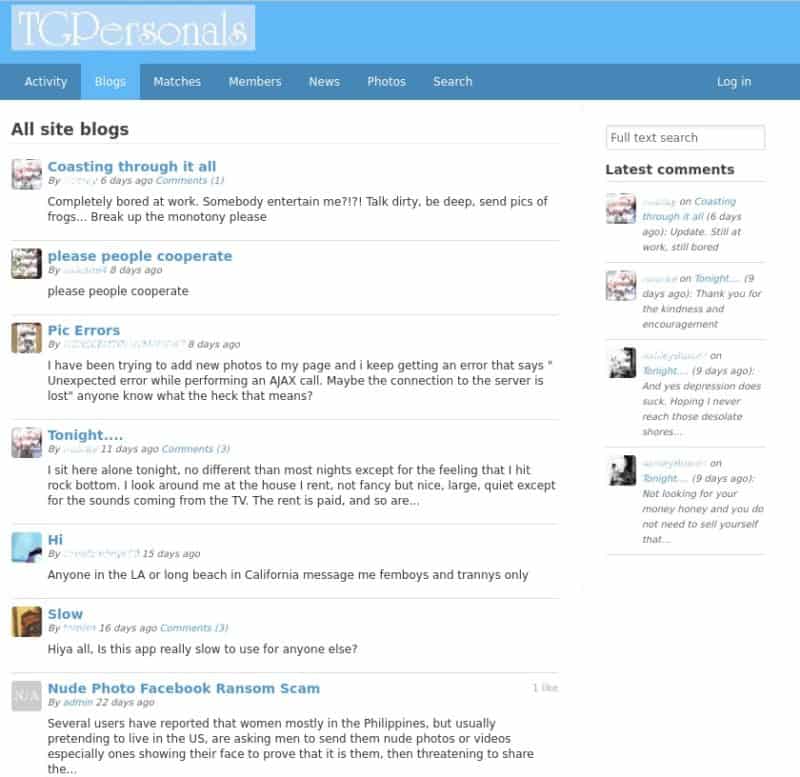 During our testing, we were struck by one particular blog entry from a member who was struggling with their family rejecting their lifestyle. We were pleased to see the strong level of support that other members of the community were providing them online.

While the “one-man operation” nature of TGpersonals reflects positively in terms of the passion and community feel that is achieved on the site, it also has its downside. During our three days of testing, all of our testers encountered multiple technical bugs. These ranged from difficulty in logging on to the site, to periods lasting as long as two hours when the platform appeared to be offline.

Even though it is a free site, this can be very irritating. We can see how established members who are loyal to the platform would not be affected by it, but we cannot help but wonder how many new users might never return to the site because of such technical issues.