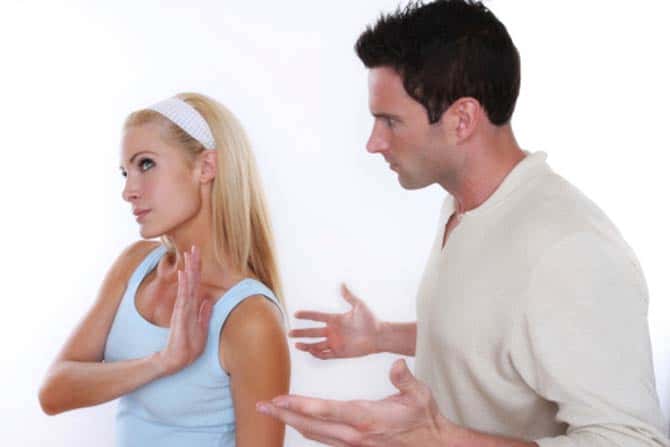 Certainly a dashing, smart, handsome, strong stud like yourself will never experience the foibles of turning women off. After all, you must be swarming with gorgeous women at this very moment. You can relax, have another protein shake, put on some more body spray and spend the next few minutes admiring your own abs in the mirror. However, for the 99.9% of the remaining male population that have experienced the zinging reality of having turned off a woman — read on for some insight on why that happens.

We’ll assume that you already know that being sexist, egotistical, racist, a pathological liar, a celebrity stalker or a serial killer are big turnoffs, so we won’t dwell on those. Instead, here are 19 things that turn women off that men often overlook.

1. You Stink, Dude
We live in an age when personal hygiene products have been mass-produced and mass-marketed to the population for over 150 years. Indoor plumbing and hot water have been a standard for over 100 years. You’d think with those things going for society, that “stinky dude syndrome” would have been eradicated by now. Unfortunately, the problem still persists.

Top on any woman’s list of turn offs is a guy that stinks. In the 21st century, there is simply no excuse for it. Save all of your excuses, “I just got home from working out” or “it’s my lazy weekend and I wasn’t expecting anyone to come over.” This one is easy to prevent, just jump in the shower, dude.

2. Overpowering Cologne
Okay, maybe you took the “stinky dude syndrome” thing too much to heart. While women find a man that stinks to be a turnoff, so to do they find it overwhelming and a turnoff when you wear too much cologne. (We never said it would be easy to please women, did we?)

Always keep in mind that women have a keener sense of smell than men. Women respond well to subtlety in pleasant aromas. Soaking yourself in cologne or dousing yourself in body spray will be more prone to turn them off than turn them on. Small amounts of a long-lasting fragrance will get you to where you need to be.

Also, if you went heavy on the fragrance to combat the stinky dude issue and avoid showering — bad move. Women’s aforementioned keen sense of smell can easily pick up foul odors beneath fragrances trying to cover them up.

3. Public Drunkenness
A sure fire way to turn off women is to make a fool of yourself — and her — by being drunk in public. No woman wants to be the one propping up her partner at a party or club as he’s slobbering and babbling incoherently about “Game of Thrones.” Imbibe in moderation and avoid this pitfall.

4. Bad Breath
If we have to explain this one in depth, then you likely have far bigger problems that not being able to turn on women. Just remember, brush at least twice a day, every day. Don’t just rinse with mouthwash minutes before a date. Poor oral hygiene is a tremendous turnoff.

5. Being a Cheapskate
A woman that is genuinely interested in you will not be measuring you by your net wealth. Women will look at your overall potential and abilities. However, being cheap — as in parking four blocks from the restaurant to avoid paying for valet parking, or not tipping servers, or insisting that you order the “2 for 1” special — will never get you very far in impressing a woman. Most of the time she’ll be turned off by it.

Don’t misunderstand, a woman doesn’t expect a man to be extravagant or wasteful with his money — she simply doesn’t want to see you skimping on her. Women have a good radar to determine when you are doing the best you can for your means, and when you are just being a cheap bastard.

6. Braggadocio
No, that’s not some fancy new coffee drink. We’re referring to bragging too much about yourself. Being overly boastful and arrogant is a direct line to turning off a woman. Even if you are as great as you publicly proclaim yourself to be, being understated of your attributes will always get you further with women than being a bragging douc… uh, windbag.

7. Repugnant Table Manners
You may be dapper and well dressed like James Bond, but if when you sit at the table and you eat like Homer Simpson, the magic gets sucked out of the room faster than an air lock being emptied into space.

Don’t talk with food in your mouth, chew with your mouth closed, have some basic knowledge of table settings — you know the little things that were taught to you years ago. Stick to them and you’ll be fine. Otherwise, you guessed it, you’ll just turn her off.

8. Being Blatant With Your Bodily Functions
Burping and passing gas are part of the condition that we know as life. He who farts and burps is alive, he who doesn’t is likely dead. That having been said, there is such a thing as being discrete about it. Any woman will tell you that a man that burps or passes gas in front of her, with the exception of when it was a genuinely unavoidable accident, is a total turn off.

So, please, don’t take pride in your 15-second prolonged burps, don’t brag about your gastrointestinal gas prowess. Be discreet about them, have them take place in privacy, such as in a bathroom. You don’t need an audience for that.

9. Being a Mama’s Boy
It’s the 21st century. A time when it is acceptable for men to be in tune with their feelings and to be able to express their gentler side without fear of betraying their manliness. That, however, in a woman’s eye does not give you license to be “maternally-dominated.”

A man that constantly runs decisions past his mother, that is overly-coddled by her, who still relies on her for basic adulting skills (like doing his laundry, buying his clothes, etc.) is going to be a big turn off for a woman. After all, what sane rational female would want to compete against a guy’s own mommy.

Love and honor thy mother, but be your own man.

10. Failure to Make Eye Contact During Conversations
Hey, you’re listening, you’re answering — what could there possibly be for her to complain about, right? Unfortunately, if you fail to sustain eye contact with a woman during a conversation she will perceive that as you being evasive, dishonest or disinterested. All three of those sentiments are big turnoffs. So — no eye contact equals big turn off.

11. Not Standing Up for Her
Most men do a stellar job of standing up for the woman in their life when the threat or offense is overt or obvious. What many men fail to do, however, is standing up for her when the affront against her was more subtle. Perhaps she said something at a dinner party and someone at the table pointed out a factual error in her statement and you just laughed it off with the rest of the people at the table. Even if the rest of the evening goes off smoothly when you get home don’t expect any lovin’.

No matter how small the slight against her, if a woman feels that you not only didn’t have her back but worse, you joined in the ridicule — sweet jelly on toast, you’re going to be in the dog house for a while.

12. Chronic Flushing Amnesia
Yes, sometimes there are plumbing issues or you simply were too drawn into your twitter hashtag game to notice that you forgot to flush. However, when this happens repeatedly it can create unwelcome circumstances. After all, nothing will ruin a frisky mood than having her go into the bathroom to “freshen up” for some romance and encountering things that nobody but yourself should ever see.

13. Never Inquire About Her
If you constantly steer conversations toward what’s happening with you and rarely take the time to genuinely ask about her, that’s going to turn her off. It will turn her off not just for the moment, but after a while, permanently. No woman wants to be around some guy that doesn’t invest time in trying to discover more about her.

— Some Other Things that Turn Women Off —

If we didn’t truncate this list right here and now, we’d likely have a ten-volume set of reference books on this topic. Just keep in mind some other things that turn women off, such as:

14. Having unkempt and dirty fingernails (you, not her)

15. Going to the bathroom with the door open when she’s there

18. Looking at other women when you’re with her