Finding ourselves well into the first quarter of the 21st century, it cannot be denied that online dating has revolutionized our traditional courtship rituals. In just over two decades, online dating has gone from a curiosity to a way of life.

When such a radical change occurs, especially in a relatively short period of time, there are going to be people who are going to criticize the new way of doing things. They will romanticize the past. Such is the case when traditional dating is compared to online dating. 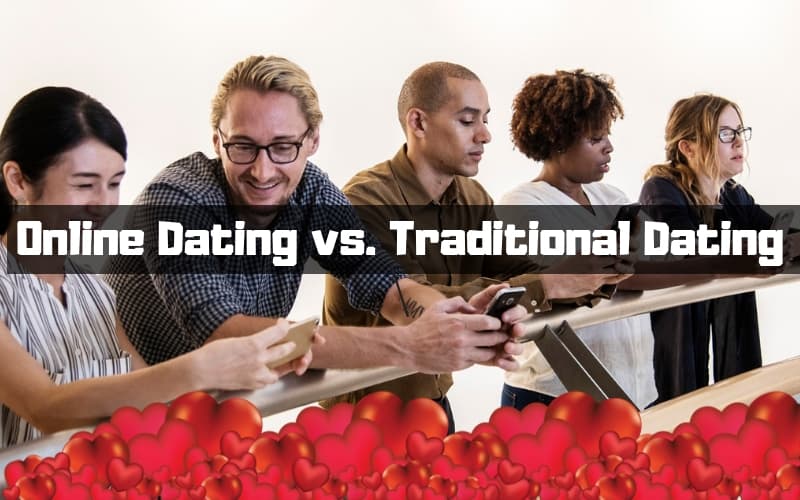 Mind you, traditional dating is not dead. Many of its attributes and characteristics that are fondly romanticized today still have a lot of merit — they still hold up. This, however, does not mean that it is superior to online dating.

1- Focussed on Personal Engagement From the Start

Traditional dating techniques dictate that when you come across somebody who piques your interest, you must start forging inroads toward spending more time with them. Usually, this involves making attempts at conversation and eventually gathering the courage to ask them out on a date.

For those who are extroverted or have effective social interaction skills, this type of relationship building can be beneficial in terms of getting to know the person before going out. It allows for a level of trust and warmth to develop.

Since the number of potential partners who you will meet via traditional dating will be dictated by the size of your local dating pool, chances are that you will only be going on a handful of dates during the course of a year. This means that you will want to make the best impression possible with each of them. As such, you will be prone to be more attentive, courteous, and to express increased generosity in terms of gift-giving and so forth.

A substantial time investment is required in traditional dating. It may take multiple dates before you are certain of the other person’s true potential.

For those who are socially awkward or who live in low-density population areas, their opportunity for meeting people the traditional way can be severely curtailed.

3- Too Easy to Become Complacent

The fact that so much time goes into fomenting each potential relationship can lead some people to remain in a less-than-desirable relationship simply due to the fact that they have spent too much time and effort on it. Some people will be prone to trying to fix an unfixable situation to avoid having to start all over again with someone else.

One of the biggest benefits of online dating over traditional dating is its speed and efficiency.

With traditional dating, you are stuck with the face-to-face approach. Let’s be honest, even if you dedicated every single day of the year to meet potential new partners, how many would you really meet who are dating material? Then, of those who are, how many of them would be willing to go out with you?

Online dating allows you to search for potential partners 24/7. This means that in a relatively short time frame you can vet dozens, if not hundreds, of potential partners. Rejection also becomes less problematic.

2- You Can Use an Active or Passive Approach

Active searches are when you are directly searching for compatible partners based on desired attributes or when you are engaged in discovery games such as those found on swiping apps. Passive searching takes place when you leave a well-crafted profile so that others on the platform can find and contact you.

This makes online dating perfect whether you are the type that prefers to make the first move or if you prefer to wait for someone to come to you.

With traditional dating, you are limited to wherever you happen to be at any given time. For most people this means that your search for a partner is essentially limited to your place of work, the areas where you spend the most of your time — such as grocery stores, the gym, etc. — and that’s about it.

In traditional dating, it is difficult to cast a diversified net relating to the type of person who you are looking to date. In other words, you usually have to conform to a plain vanilla style of dating. It is very difficult to find potential partners who may share more specialized tastes — at least up front.

For example, if you enjoy a specific type of freakiness, that is not the sort of topic that can easily come up during the preamble to a first date. Hell, it probably wouldn’t even come up until many dates into the relationship — if at all.

With online dating, you have the ability to search for people not only based on attributes related to their physical appearance and personality but also on more in-depth issues such as particular kinks and fetishes.

This also holds true for other delicate topics such as specific views on religion, politics, and outlook on life. In traditional dating, it is very difficult to vet potential partners for those qualities. Online dating, however, literally allows you to do just that with a few clicks of the mouse or taps on your screen.

As convenient, practical, and comprehensive as online dating can be, it would be untruthful to state that it doesn’t have a few cons.

1- Quality of Platforms Can Vary

Not all online dating sites are created with the same level of quality. Many provide an excellent user experience and are results-oriented. However, there are also a few which offer pathetic user experiences and a near-zero probability of meeting a potential partner.

This is why it is always important to conduct due diligence on a dating platform before you join. This could be accomplished by consulting independent third-party review sites, comments from actual users of the services, or taking advantage of free memberships to gauge a site’s true effectiveness.

2- Most Come With a Cost

There are free online dating platforms that offer a good user experience. However, most free offerings are going to be limited and some simply do not have the muscle to provide the results that most people would expect.

This means that in order to get the full benefit of online dating you will most likely have to pay for a membership. Prices can vary from a few dollars a month to double- and even triple-figure amounts per month depending on the platform.

When measured over the course of several months, however, most people will find that when taking into consideration the savings in time, effort and money over traditional dating, online dating site memberships are in fact a bargain.

— So Who Wins in the Battle Between Traditional and Online Dating? —

Seeking a clear victor between traditional and online dating is not the point. Both have positive potential. You should never discard traditional dating techniques entirely. If an opportunity comes to meet someone the traditional way, by all means, go ahead.

The important thing is not to exclude yourself from the online dating revolution. Doing so would place you at a disadvantage of finding the partner of your dreams.