Whether you are in the prime of your singlehood enjoying the fun and frivolity that comes with independence and freedom or if you are older and seeking to settle down, everyone has a past — more specifically, a “dating past.” 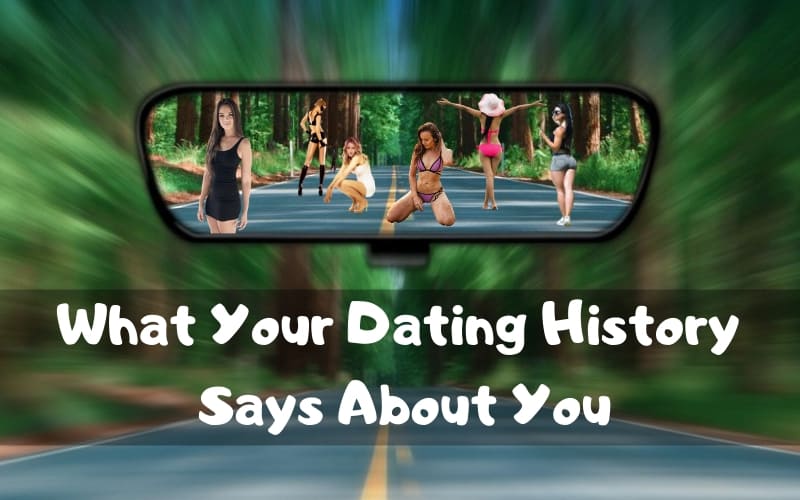 Depending on your personality, the ease with which you meet others, and the mood of the dating gods in bestowing your dating fortune, everyone’s dating history and experiences will be different. Yours might be as pleasurable as a montage from a 1980s romantic comedy, as steamy as your PornHub history, as boring as reading through the white pages of a 1992 phone book, or as spooky as spending a night at an abandoned coffin factory. In the majority of instances, the longer you have been dating or playing the field, the more diverse your dating history will be. This means that most of you will have a mash-up of good and bad dating experiences.

While everyone has a handful of dating stories that they like to share or recall to themselves, few people actually take the step to analyze their dating history — to extract insightful wisdom which can help them in going forward, in becoming a better dater.

Here are a few things that your dating past says about you.

1- You Have Dated a Large Number of People

This is a tricky one because it is so subjective. For example, if you are at a stage in your life when all that you are seeking are casual encounters, then having a large number of notches on your belt would be indicative that you are doing well in the dating scene for the objectives that you have.

If, on the other hand, your primary dating objective is to find a long-term partner, then having dated a large number of people in a short period of time could be indicative that there is something off in your dating game.

If looking back at your dating history you realize that you rarely go out on dates. That you only meet one or two people per year when you are in “active dating mode,” that opens up another set of possibilities.

It may indicate that you are shy or introverted. This may require you to take a more active approach in coming out of your shell.

It might also be a sign that you are not engaging with other people regularly. You may need to get out more.

There is also the possibility that if you are going out but are not having any luck in finding a date, that the places you are frequenting are not the best suited for finding the type of partner who you are seeking. You may want to consider online dating platforms in order to improve your luck. Hey, there is a reason why online dating is so popular. It provides one of the best ways to meet people who are the most likely to be compatible with you.

If you go out regularly, give online dating a serious shot, and you still aren’t getting dates, that doesn’t mean that you are broken. It may be a case of you not adequately establishing what you are looking for in a date or relationship. It is always a good idea to have a rough mental sketch of who you are seeking in terms of looks, personality, and outlook.

If the majority of your relationships end with you on the receiving end of the breakup, it probably isn’t a bad idea to reflect on what is contributing to that result.

You should ask yourself some basic questions — such as, are you overly possessive? Are you expressing excessive jealousy? Do you tend to be too domineering?

By posing these sorts of introspective questions to yourself you will be in a better position to identify what might be turning off your potential partners. it will also allow you to improve your demeanor and at the same time, you’re dating luck.

4- You Are the One Instigating the Majority of Your Breakups

If by looking back on your dating history you realize that you are the one initiating the termination of the majority of your relationships, then that can be a sign of having an overly impulsive nature. You should consider whether you are the sort of personality who is prone toward becoming sentimentally attached to another person too quickly.

If superficial qualities impress you this can often lead to early relationship blindness. In other words, whether it is the physical- or personality-based attributes of the other person that draws you in, if you are easily impressed to the point of becoming smitten with a person by what is present on the surface, you may not be looking deep enough into the other person’s potential for compatibility.

Being easily smitten means that potential flaws, potential irritants that can surface as a relationship matures go ignored. In doing so, you may find yourself frequently entering into relationships which eventually become unbearable prompting you to end of them.

— You See, Your Dating History Has Value —

As you can see, your dating history is more than a collection of stories that you only share on occasions with your close friends. Your dating history carries with it valuable insight that will make you more effective and more successful with your dating — whether you’re seeking casual encounters or marriage.

By analyzing your dating history — more specifically you’re dating patterns — you will be able to understand your strengths and weaknesses as a potential partner. It will also allow you to make the necessary improvements to have the dating style and performance that you have always wanted.

A good way to look at it would be by comparing it to analyzing your team’s performance after competing against another team. By doing that sort of post-game analysis you inevitably improve your chances at a better outcome the next time your team hits the field. It works the same way when it comes to dating. Consider it your own type of “post-game” analysis.