With such an immense reception and consistently soaring popularity, we felt that it was the perfect time to evaluate the Bumble app. We wanted to see how it stacked up to other online dating apps. Did it really balance the playing field? Was it just a gimmick? Here is our Bumble review. 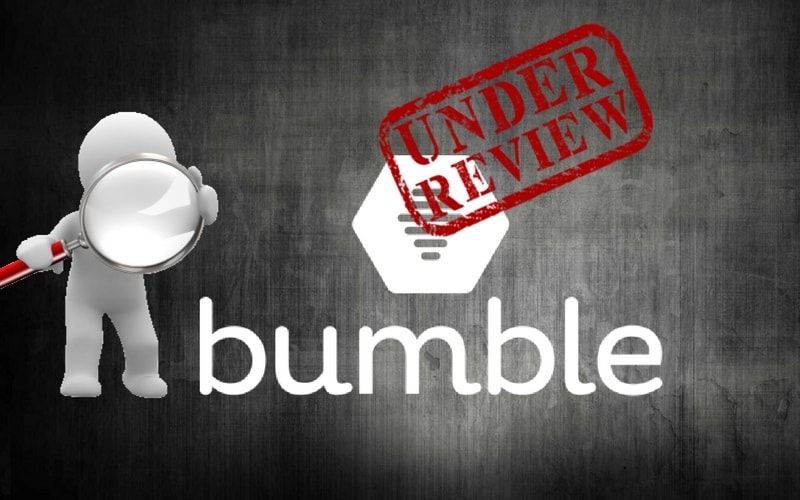 We found that the Bumble app inserted a dose of needed sanity to dating apps. The woman-first concept for making contact creates a user experience that is improved for both men and women. With a free version that is powerful and effective — in some ways superior to the premium version — we wholeheartedly recommend the Bumble app to our readership.

We rate it as EXCELLENT.

Watch Our Bumble review on video or scroll down to continue reading.

— Pros and Cons of the Bumble App —

Imagine if Tinder were to be redesigned by a woman. Quite literally, that is what you get with the dating app known as Bumble. Founded by a former female executive of Tinder, Bumble has often been called the “feminist Tinder.” This is likely due to the fact that the Bumble app takes a woman-focused approach towards online dating.

On Bumble, the woman always makes the first move. That’s right, conversations can only be started by a woman. This unique approach to dating apps has resulted in over eight million active users — 55 percent of them women. That figure is even more impressive when you consider that the app has only been in existence for two years. It was launched initially in late 2014.

— Where to Get the Bumble App —

At its core, Bumble is a location-based swiping app. That means that it is only available as a mobile app — there is no desktop or browser version. Currently, it is available for Apple and Android devices. The app can be downloaded for free from iTunes and Google Play.

Regarding profile pics, one thing that we discovered during our testing was that if you want to change your profile picture, you must have your picture verified by Bumble. The verification process is unique. You are required to upload a picture in a pose specifically requested by Bumble. A real human being then compares the profile pics you wish to upload to this “test” pic to verify that it is you. Bumble claims that it is the first U.S. dating app to use this method of photo verification.

Since you register via Facebook, once you enter the app for the first time, you never have to worry about logging in again. Unless, of course, you sign out from your Facebook. While we found this to be very convenient, it also prompted some concern. If your phone were to be lost or stolen, there is the risk of strangers being able to access your Bumble dating information. We would love to see them introduce the option for a PIN-enabled lock-screen for the app itself.

After registering and entering the Bumble ecosystem for the first time, you have an opportunity to enhance your bio. Even though Bumble relies heavily on the visual components of attraction, there is an “About Me” section that appears when people click on your profile. We would recommend writing something short, but witty about yourself in that section. Think along the lines of something that captures a bit of your personality in text form. Having seen many profiles on Bumble, the ones that stood out the most were the ones that intrigued and enticed.

Getting down to business with Bumble is as easy as swiping left and swiping right. As with other dating apps, swiping left means that you’re rejecting that particular profile; while swiping right means that you are interested. On Bumble, men and women both swipe profiles, however, only women can initiate the conversation when a match has been made.

It is also important to note that the woman only has 24 hours to initiate a conversation after a swiping match has been established. If the woman does not initiate a conversation in the first 24 hours, the match is gone forever — poof, lost to the online dating abyss. The same holds true for sustaining the conversation. Once a conversation is started, if there is a lull in communication for more than 24 hours — bye-bye, it’s gone. While some might feel concerned that 24 hours is too short of a time period, we found that it created a sense of urgency and that this spurred our female testers to reply quickly. Overall, we believe that this feature results in greater engagement compared to other dating apps — that’s a positive.

While the primary function of Bumble is to serve as a dating app, it can also be used as a general socializing app. There is a section labeled “BFF.” This allows users to swipe profiles not for dating purposes, but solely for friendship. In the BFF section, the woman-first rule does not apply. Either party can make first contact once a match is established.

Bumble is a free app, but there is a premium version available. It is known as “Bumble Boost.” It has a cost of $9.99 per month. Bumble Boost adds three exclusive features over the free version. The first is called “Beeline.” This allows paid subscribers to only be served profiles of other users that have already liked them. The second feature is known as “Rematch.” This allows you to revisit expired matches — those that you allowed to lapse beyond 24 hours. In our opinion, the presence of this feature is actually counter-productive. It removes the urgency factor that our testers said was so much fun in the free version. The third feature is known as “BusyBee.” This allows users to extend the 24-hour window for contact an unlimited number of times. Again, we found this to take away from the user experience. In our opinion, only the Beeline feature adds value over the free version — the other two features actually deter from it.