We conducted an evaluation and review of the Tingle app to see firsthand how they manage to keep the excitement of a location-based swiping app going, while simultaneously removing the cringe-worthy elements that often accompany such dating apps. Here is out Tingle app review. 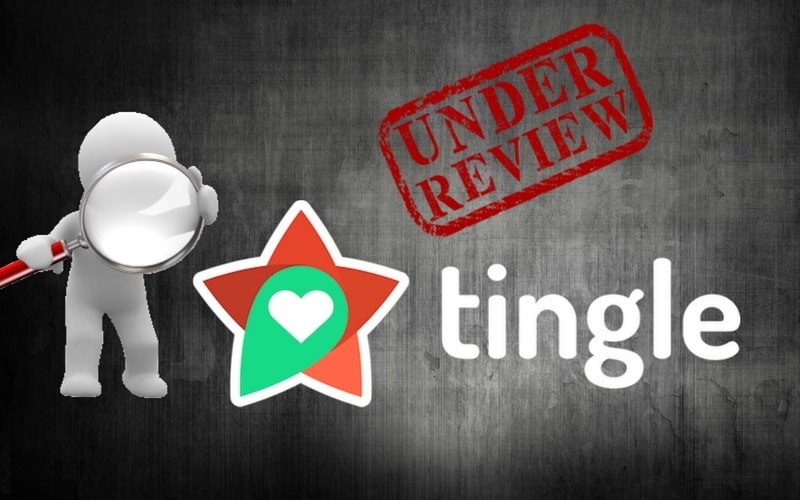 We found Tingle to be familiar, yet refreshing. It doesn't shake up the dating app concept as much as some might suggest, but it makes enough changes for the better to make it a potential trend setter within the online dating industry. The ability to combine location-based matching along with anonymous vetting via audio and video chats makes it worth using in our opinion. We would definitely recommend that you give Tingle a try for yourself.

— Pros and Cons of Tingle —

When you meet a person that you find attractive and interesting, how does that make you feel? Happy, giddy, tingly? It is precisely that mixture of positive feelings — those that overwhelm you when you find a person that you are compatible with physically and emotionally — that the dating app known as Tingle attempts to bring to the palm of your hand.

Tingle takes the concept of a swipe-based dating app and improves upon it. By adding certain features, while removing others, Tingle has set about to make the common dating app safer and more effective. The creators of Tingle are upfront about how they want their users — especially women — to feel when using their app. They want them to be more secure and comfortable, while at the same time being more engaged. Tingle believes that a user base that doesn’t have to deal with creeps, stalkers and other assorted lowlifes will appeal to a larger number of women. It sounds like a simple formula, but just how does Tingle go about doing it?

— Where to Find the Tingle App —

Of course, in order to make use of a dating app, you must know where to get it. Tingle is a mobile-only app. It cannot be accessed via a desktop browser. It can be downloaded for free from the Apple App Store or Google Play for Android devices. Installation is as fast and simple as installing any other app on your phone.

Once you’ve installed the Tingle app on your smartphone, there are two ways to register. The fastest way is to use your Facebook credentials. Don’t worry, Tingle does not post anything on your Facebook timeline when you do this. We read through their FAQ and terms of service sections thoroughly. They are adamant that they never violate their members’ privacy. Linking your Facebook account to Tingle also streamlines the process of uploading photos to the app. Any photo that you have uploaded to your Facebook account is pre-approved for posting to your Tingle profile.

The alternate method of registering on Tingle is to verify your account via SMS. When you choose this method you must also provide them with a valid email address, select your own username and password and wait for a verification code to be sent to you via SMS message. You will need that code to complete the registration. In our case, we encountered a minor problem in receiving the SMS code. It took a total of three attempts to finally receive it. Honestly, we do not know if it was due to the Tingle servers or our cell carrier.

When we registered via SMS, we discovered that we still had to partially link our Facebook account if we wanted to upload images. It appears that Facebook is the only method used by Tingle to verify and authenticate images. Armed with that knowledge, there seems little reason to use the SMS option — it is simpler and faster to go the Facebook route.

— How Is Tingle Different? —

It should be noted that Tingle is not new. It has been around since 2009 — it actually predates Tinder. That means that they have practical experience in how dating apps work. When they completely revamped their service and relaunched Tingle in 2016, they put this experience to full use.

To like a member’s profile you swipe up. To pass on someone, you swipe down. Swiping left or right will show you more pictures of the member, as well as additional details about them. To be honest, this did not strike us as being earth-shaking or revolutionary. Where we did notice a significant departure from other apps, such as Tinder, was in the way that Tingle applies its location-based matching. On this app, it is referred to as “radar.” Similar to other apps, it uses the geolocation data of its members’ phones to scour for other members with similar interests that are nearby. When compatible matches are found, both members are alerted.

You might be saying to yourself, “WTF, all location-based swiping apps do that — what’s the big deal?” The difference with Tingle is that it allows its members to take advantage of proximity-based matching without the exposure. On other apps, you are usually limited to written messaging to establish contact with a match in close proximity. If you want to know them better, you either have to exchange real phone numbers or meet in person. This inevitably leads to those uncomfortable moments when you decide to meet up — blindly. It may have already happened to you — the person wasn’t how they represented themselves to be, or simply, they were plain spooky. What’s worse, they may now have your phone number. With Tingle that doesn’t happen. Tingle allows members to engage in secure and anonymous audio and video chats before meeting. This allows you to properly gauge the other person before meeting face to face. It also goes a long way toward eliminating catfishing on the app.

Our test subjects, two men, and two women, all were in agreement that this was a great feature. Not only did they express that it made them feel safer when deciding to meet someone in person, but they felt that it also saved them time. It allowed for faster vetting of who was worth meeting and who was not.

Another cool feature on Tingle is what they call “Teleport.” By moving a little airplane icon on your screen, you can have your profile appear to members in other parts of the world. Let us say that you are planning a trip to Chicago next month. If you wanted to start getting an idea of the dating scene — or better yet, start meeting people before you got there — the Teleport option is an excellent tool to accomplish this.

While not intended for this purpose, some of our testers used the Teleport feature merely to meet people with the express purpose of engaging in long-distance contact. Tingle discourages that sort of use. They prefer that users stick to using the app for face to face dating, but the way we figure it — if both parties are fine with it, why should anybody care?

We found no negative aspects to the functionality of Tingle. We were quite pleased with its performance. Where we did encounter an issue, however, had to do with the size of its user base. Compared to other dating apps, it seemed as if Tingle was short on members. Using identical profile criteria that we have used on other location-based apps, we simply found the number of matches that were being generated for us to be less than half than on those other apps. We assume that since Tingle was relaunched less than a year ago, that it may be currently playing catch up in rebuilding its membership numbers. Hopefully, this problem will resolve itself in the not too distant future.

Get the App
Other Hookup Apps
39
SHARES
ShareTweetPin
RedditTumblr