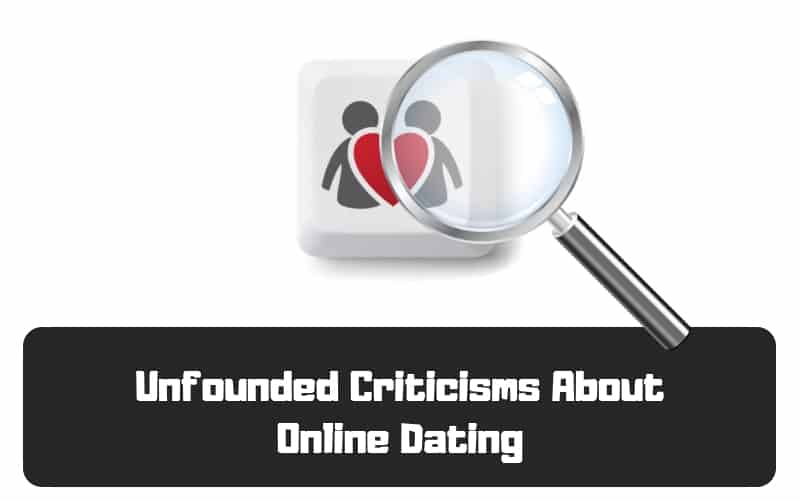 Online dating has definitely revolutionized the way people meet and date. Online dating platforms have had an impact on many of the courtship rituals that had existed unchanged as recently as our parents’ generation.

While most singles who have used and benefited from the services offered by online dating sites would be the first to sing their praises, there are still a vocal minority of critics that persist in criticizing and belittling the concept of online dating in general. These critics will often cite the “impersonal” nature of meeting people through venues established by modern technology.

The majority of the criticisms tossed about by these critics tend to be unfounded and misguided. We have listed the ones that are heard with the greatest frequency and have also laid down counterarguments for each one that proves them to be false.

1. Online Dating Is Killing Off Romance

This argument is presented over and over — usually by people who have never tried online dating for themselves.

If anything, online dating has revitalized romance. All of you who have had to go through the first date experience after you met somebody online know that you are on your toes throughout the first date. Both men and women put in additional effort to make sure that they look good and that they present themselves in the best light possible. This creates situations in which romance flourishes and blossoms, not ones in which it wilts.

Perhaps some of the critics claiming that online dating is killing off romance are confusing online hookup platforms with online dating. Hey, casual encounter platforms have a time and a place. When all you are looking for is a one night stand, quite obviously romance is not going to be high on your list of priorities. However, the majority of people who use online dating platforms looking for long-term relationships will always be thinking about inserting romance into the mix — especially in the all-important conquest phase.

If we were honest with ourselves, we would admit that any sort of action that we engage in carries some level of inherent risk. When you drive to the grocery store, there is always the possibility of being involved in a collision with a drunk driver. When crossing the street, someone might run a red light and run you over. Even the simple act of showering could result in you slipping and causing injury or death to yourself.

You could just as easily come up with worst-case scenarios involving online dating. However, when you compare them to traditional forms of dating, you will find that online dating can actually create a much safer environment.

Look at it this way, with online dating you have the ability to choose a platform that offers powerful profiling features. This allows you to vet potential partners to a much finer degree — definitely more so than by just striking up a conversation with a stranger who you met in public.

The majority of online dating sites do not conduct in-depth background checks on their members — although there are a select few that to do. However, simply by analyzing the history and reputation of a member on a dating platform will allow those who may be interested in meeting with them in person to develop an idea as to the character and personality of that person. It is easier to weed out the weirdos and freaks.

When you take all of this into account, it would seem to validate the opposite of what the safety critics like to spew. The reality is that online dating is actually safer than traditional dating.

3. Online Dating Is Full of Liars and Phonies

Hey, the entire world is full of liars and phonies. It has been since the dawn of civilization. Honestly, can anyone claim with a straight face that if you were to go to a 1970s era singles bar and applied a lie detector test to every man and woman in the place that you wouldn’t find a few “mistruths” being bandied about?

If anyone would have conducted such a test for real, chances are that the lie detector machine would have caught fire due to its sensors being overheated from all of the BS that was being said in the place.

No matter where or how people meet, there is always going to be a certain level of exaggeration and false expectations that are going to be set. It is simply human nature. The fact that people meet online does not increase the incidence of such behavior. If anything, online dating has helped to contribute to an overall reduction in that type of BS. It is easier to filter out the BSers during the online chat phase before you actually meet in person.

4. Online Dating Is Just for Sex

First, there is nothing wrong when people want to use online platforms to meet for casual sex. As a matter of fact, a significant number of online discovery platforms are dedicated entirely to the casual encounter niche. There is absolutely nothing wrong with that and for those who are only seeking such short-term encounters, it is a handy and wonderful thing.

That being said, however, one should not confuse online dating sites with those types of online hookup platforms. They are two distinctly different things. Yes, some platforms may offer users both options, but each user decides which of those intents to focus on.

In other words, users of online dating platforms whose intent it is to find long-term partners will do just that — and they will do so successfully. Online dating platforms have established a very healthy record of helping people find true love. Some studies suggest that by 2025, over 75 percent of couples entering marriage will be as a result of having met online.

This means that online platforms can be used just for sex — if that happens to be all that you are interested in — but they can also be used quite effectively to find love and even marriage.

We suppose that there will always be critics and naysayers of everything in this world. When it comes to online dating, if you have yet to try it for yourself you would be best served to ignore the critics. Instead, try online dating for yourself and come up with your own conclusion. You will find that the experience is not only fun and exciting, but it is also very results-oriented. We hope that the handful of counterarguments that we presented above will help you in bolstering your curiosity in online dating.