There is a dating site, known as 7orBetter.com, that is dedicated to promoting the maxim that “bigger is better.” Yes, ladies, if you are tired of joining dating sites — going through the ordeal of chatting online, stressing out about first dates — only to be disappointed at that most critical moment in the bedroom, then 7orBetter.com offers its services as a solution. You know what we are talking about — when instead of seeing a powerful mast akin to a 19th-century trans-oceanic schooner, you are presented with a shriveled cocktail weenie — oh, the humanity! 7orBetter promises to spare you from such disappointment.

Don’t laugh, we are serious about 7orBetter. It really does exist. As a matter of fact, it has been in operation since 2008. If you’re curious about this site, check out our 7orBetter review. Would you measure up to this site? 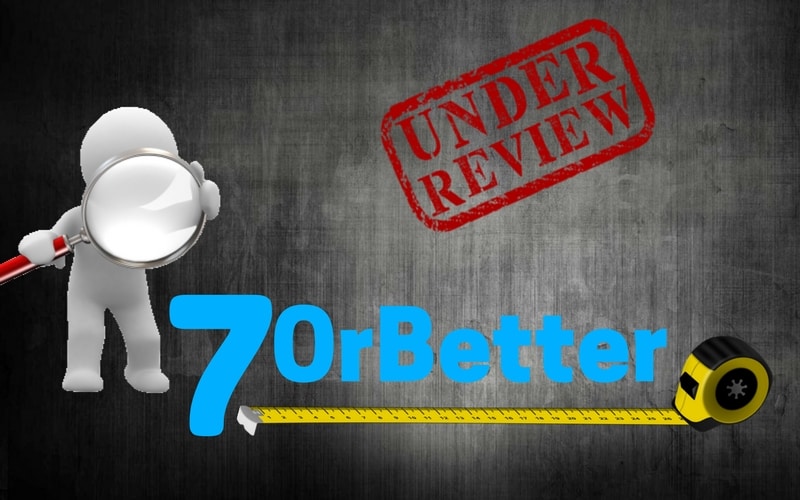 In our opinion, if you want a good laugh, check out 7orBetter. Mind you, we find no redeeming quality to the site. It does, however, make for a great novelty site.

As a dating site — not due to its concept — but rather to its extremely small membership base and lack of real women members, we rate 7orBetter as a FAIL. 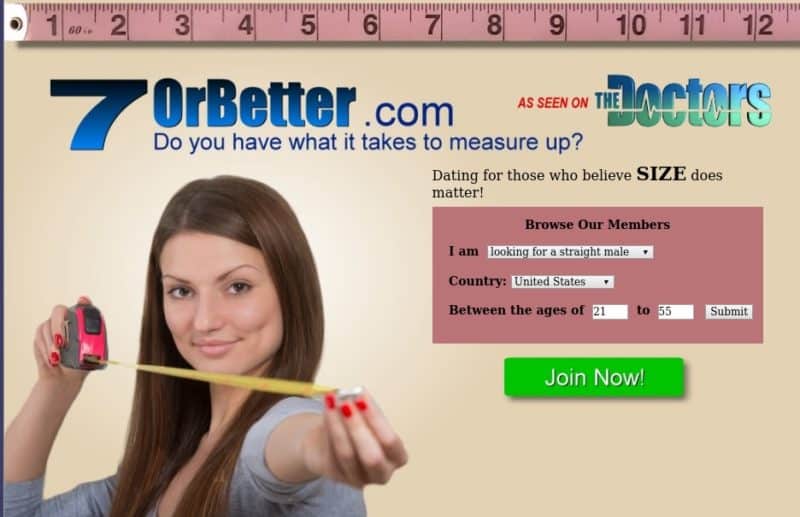 Manhood — through the generations it has been expressed in many ways. Through contests of strength, battles of wits, even expressions of artistic grandeur. However, there is a measure of manhood that is as constant as it is eternal. Yes, we’re talking about size. Mind you, we’re not referring to the size of your generosity, nor the size of your heart (although if you are displaying signs of an enlarged heart, you should probably see a doctor about that) — no, our friends, we are talking about the size of your penis.

We must be perfectly honest with you. When we first heard about 7orBetter and the concept behind it, we weren’t sure if it was real or a joke. Once we visited the site and did a little research, lo and behold, we ascertained that, in fact, it was a real dating site. When you visit the welcome page. you will notice that the overall look of the site is atrociously dated in style and design. Of course, if you visit this site you are not interested in web design, you’re looking for big d*cks, dammit!

Up front, 7orBetter states that it is dedicated to helping women and gay men find men who have large penises. As its name implies, the site considers a big penis as anything over seven inches in length. (That’s 17.78 cm to our Canadian and British friends)

The registration process is relatively simple. If you are a man, you must provide basic information such as your age, location, and a valid email address. You must also provide additional information regarding your physical attributes. These include your height, weight, complexion, and, oh, yes — the length and the girth of your PENIS! 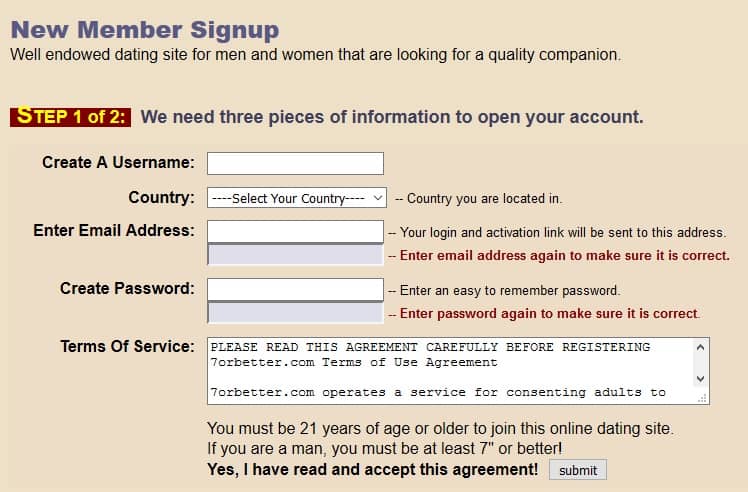 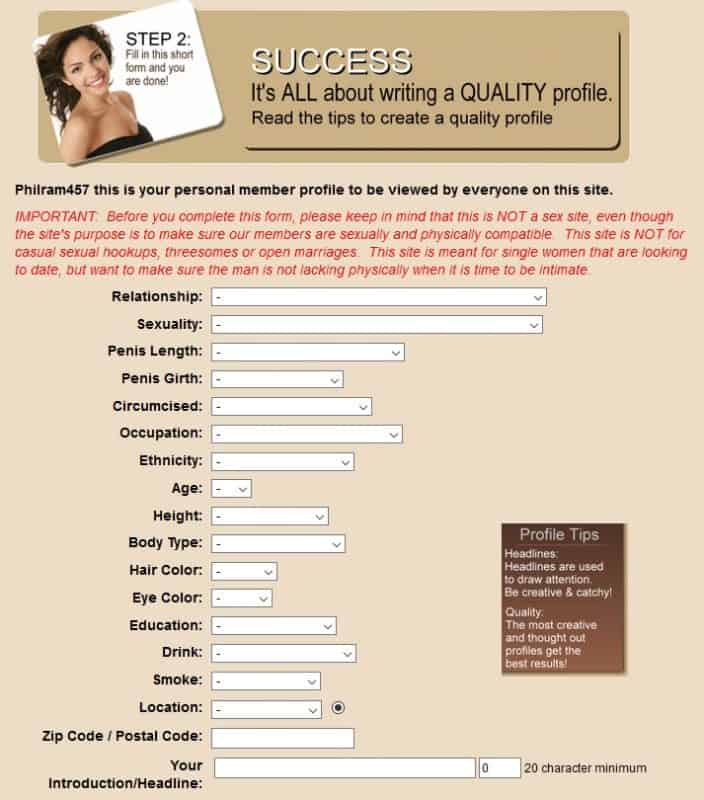 Not only that, but you must also state whether you are circumcised and your manscaping status. Hmmm, we wonder when eHarmony will add these questions to their questionnaire?

For those of you out there who may be thinking about taking liberties and exaggerating your “attributes,” allow us to inform you that 7orBetter frowns on such behavior. So much so, that it prohibits it in its terms of service.

You may ask yourself, “how can they confirm my claims?” Well, you don’t have to worry about 7orBetter requesting visual confirmation. However, if two or more female members report to the site that you have exaggerated about your one-eyed snake, you will be permanently banned from the site. Ouch!

— Friendly Reminder on how to Properly Measure a Penis —

It would be irresponsible of us when reviewing a site such as 7orBetter not to provide our readers with a friendly reminder about how to properly measure a penis. Several of the male members of our editorial staff were actually confused on the subject. Fortunately, one of our female writers worked as an assistant to a sexual behavioralist when she was in college and enlightened us on the proper technique.

You should always measure from the top of the penis. Measuring from the sides or from the bottom is considered cheating. Also, you should measure it when fully erect. If you feel that you might forget these instructions, print them out and pin them to your refrigerator.

With nearly a decade of operation, you would expect that 7orBetter would have a “reasonably-sized” membership base. After some probing, we discovered that 7orBetter has approximately 40,000 active members. You can take this one of two ways — either there is an extreme shortage of well-endowed men in this world, or 7orBetter has a piss-poor following.

The gender ratio on the site is highly skewed toward the male side. For all intensive purposes, 7orBetter is a sausage fest. During our testing, we scrolled through its active members and over 90 percent were men.

To be honest, the user experience on 7orBetter is not that great. We know, that must come as a shock to you.

In terms of functionality, 7orBetter is basically a glorified search engine. It uses a minimalistic set of search criteria to provide you with a list of suggested matches. The problem is, if you join the site as a man searching for women, you are going to get a very small list of results. If you join as a man or woman seeking men who are packing, you will be served with a large list of members. No pun intended, by the way. 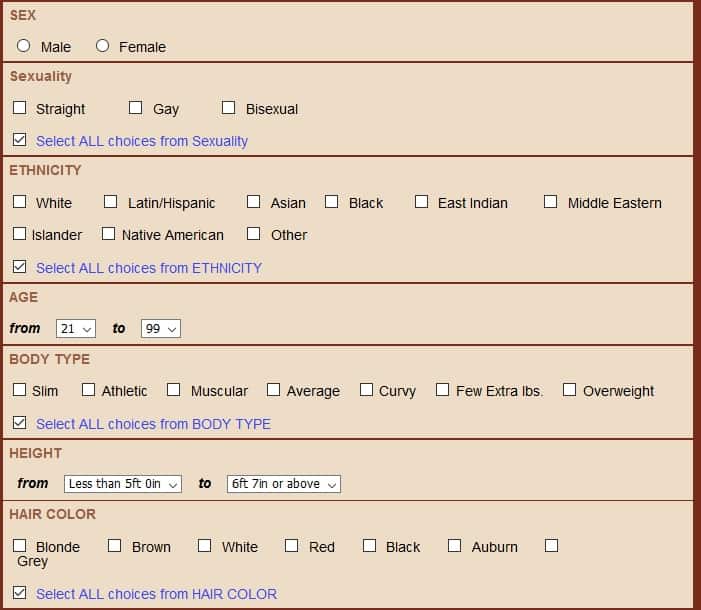 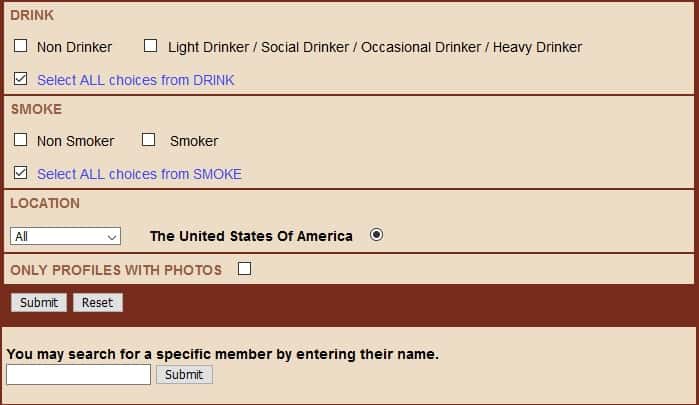 When you click on a user’s profile you will be shown their profile picture, a list of their normal attributes, as well as their penile attributes. From that, you can make a decision as to whether or not you wish to send them a message.

One thing which we must mention, even though 7orBetter revolves entirely around the human penis, it is somewhat prudish in what it allows on its site. If you think that you are going to be inundated with a mountain of d*ck pics, you would be mistaken. 7orBetter prohibits explicit imagery of any kind. Yes, the site that makes you reveal the length and girth of your love stump, will not allow a picture of the same!

7orBetter will not even allow what it considers to be vulgar language. So if you want to boast about your rammer, your iron rod, your baby-maker, your yogurt slinger — you must be very careful with the words that you choose.

Fortunately, 7orBetter is a dating site that is free to join for both men and women. The site is monetized by advertising displayed on its platform. If you join, you won’t lose a cent.