You have been best buds for years. Long before you met your present girlfriend you would hang out together constantly. For a while, you were even roomies. For all intents and purposes he’s not just your best friend, he is closer to you than a real brother. 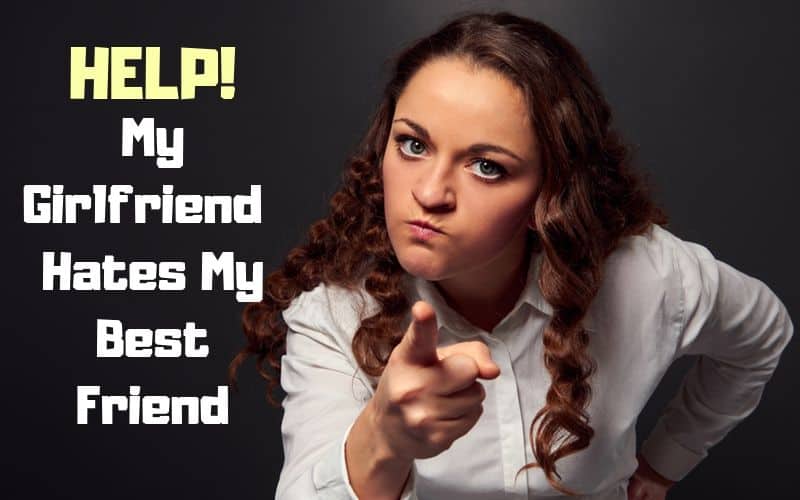 That is what makes everything so much more awkward and difficult if your girlfriend can’t stand him. Worse, if she has practically banned his presence whenever she’s around.

In any relationship, it is normal for one partner to not be overly fond of one or two friends of the other and vice versa. However, there are instances when this reaches an extreme.

These sorts of situations rarely develop overnight. There will usually be a few warning signs.

1- Your girlfriend starts to voice criticism about your friend’s behavior or appearance. This will usually start slowly but begin to build over time. Eventually, it will reach a crescendo where she will be very direct about voicing her dislike, or even disgust, for your friend.

2- She will start to make excuses for not being present when she knows that your friend is coming over. If you live together, she may pretend to be sick and stay in the bedroom and not come out while he is at the house.

3- When organizing get-togethers with other people she will purposely omit him from the invitations list.

4- When they are together in the same place, she will avoid talking to him and if he directs the conversation towards her, she will be very curt and only offer minimal engagement.

Please keep in mind that if any of these examples occur only once or very rarely, that doesn’t automatically mean that you are facing a situation where your girlfriend hates your best friend.

The more frequently — or the progressively worse — that this type of behavior becomes, that’s when it should serve as a warning that a problem is present.

— Should You Confront Your Girlfriend About It? —

If you detect that there is tension or negativity developing between your girlfriend and your best friend, it is obvious that you must play a role.

1- Your first role is that of an investigator.

Choose a moment when there are no other ancillary problems in the air with your girlfriend. Talk to her about the subject. Be direct but not confrontational. Voice to her your suspicions that she doesn’t like your friend.

Let her state her case. In other words, don’t become accusatory and do not dominate the conversation. You want her to speak her mind in order for you to determine how severe her dislike of your friend is and whether the situation is salvageable.

Whatever you do, don’t make her feel like you’re being judgmental of her and don’t automatically take his side.

2- Your second role is that of diplomat and peacemaker.

After you hear your girlfriend out — mind you, this can happen in one session or it can take place over a period of time — you should transition into the role of a diplomat.

Much as a diplomat is trained to broker peace or to arrive at treaties to avoid the prolongation of conflicts, so too must you evaluate the true nature of the differences between your girlfriend and your best friend to reach a similar end.

The purpose of this evaluation is to determine whether you need to broker a reconciliation or if the best that you are going to get is the equivalent of a peace treaty.

If the differences between your girlfriend and your best friend started over something trivial, the probability of reconciliation is high.

Usually, all that is required is talking to your best friend and explaining to him the wrong — be it real or perceived — that your girlfriend felt he had done her. If her issues with him are related to his behavior — such as being too loud, crude, drinking too much, etc. — the tension can be removed by simply modifying his behavior when she is present.

If prior to the ill feelings they had a decent relationship, they should be able to find a path to return to those better times. The fact that both of them care for you means that there is a strong motivational factor for them to patch things up.

You’d be surprised how many times the best friend doesn’t know that the girlfriend doesn’t care for him. Once they are informed of that fact most will be willing to do what it takes to make things right.

— Worst Case Scenario: Agree for Them to Disagree —

If the backstory is more profound, if the differences between them are unbridgeable, then you may need to arrive at some sort of pact that is agreeable to all involved. That means your girlfriend, your best friend, and you. A sort of trilateral agreement.

From your girlfriend’s part, it will mean that she will have to agree to a set of situations where she will tolerate your best friend’s presence and be civil about it. This would normally include certain group celebrations such as your birthday, certain holidays, or other social get-togethers such as the Super Bowl. Essentially she will be agreeing to put up a good face as one often does with a disagreeable in-law.

For your best friend, this implies that he must be on his best behavior on those few occasions when he is going to be present with your girlfriend. He should be made aware of what to avoid in terms of behavior when they are together.

For you, it means accepting the fact that there may never come a moment when your girlfriend and best friend will become friends themselves. You will have to accept that the best that you can hope for is that things do not continue to degenerate and that the moments when they are together things will be civil.

As we explained above, hopefully, your situation will be such that there will be a genuine reconciliation or bond that develops between your girlfriend and your best friend simply by clearing the air.

If not, then you must be accepting of the fact that they will never be close. Your end goal is to do everything in your power so that her disapproval of him doesn’t drive a wedge between you and her or you and him.